Trending
You are at:Home»Gadget News»Benchmark App Ban Applied to Sony Phones Under the Radar
By Gadgetman on Jan 26, 2014 · Gadget News 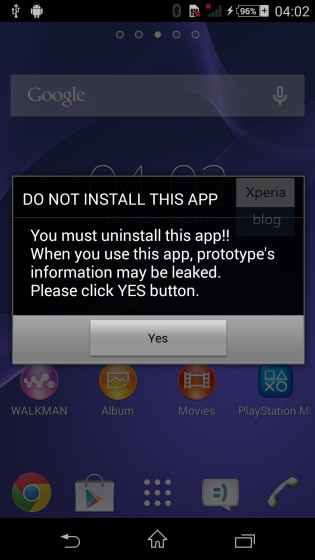 Smartphone benchmark apps have proven to be a very valuable source when it comes to specification leaks on new smartphone devices, and Sony has noticed the threat that lies within such applications.

To try and prevent information leaking out about upcoming Sony phones and mobile devices, Sony has installed a precaution in place on to all of their devices that are currently being eyed up by the press and the media.

When trying to open an installed benchmark app, the user is cautioned to uninstall the benchmark app, and makes it impossible for the user to actually access the interface of the app or make any benchmark tests.

Unlike Samsung, who recently forged their benchmark scores to score higher in the apps, I think this new move by Sony is actually a positive thing, and shouldn’t be regarded as an immoral thing.

I’m sure the reasoning behind the benchmark ban on new Sony phones is to stop users who are most likely already on an NDA from accidentally leaking out information about the device. Leaks and rumors have proven to greatly impact sales and revenue for tech and digital companies because consumer’s minds are usually made before a marketing campaign has even started.

Although this new restriction has been put in place for any Sony phones currently under the radar, I doubt this will stop new leaks coming in, and the smartphone industry is notoriously successful when it comes to getting their hands on information before it’s official announcement.

I think cutting down on leaks will solve one of the biggest problems on a consumer level in the smartphone industry. At this point in time, it’s very hard for a consumer to make decisions about buying a new smartphone, because despite the latest and greatest being available on the market right now, there’s always going to be a spotlight put on the next best thing, and that pressures consumers to wait a few months for a leaked device to be officially announced.

This is usually an ongoing cycle that only stops when a consumer decides to stop waiting and pick a smartphone, usually months after they could have taken that action in the first place.