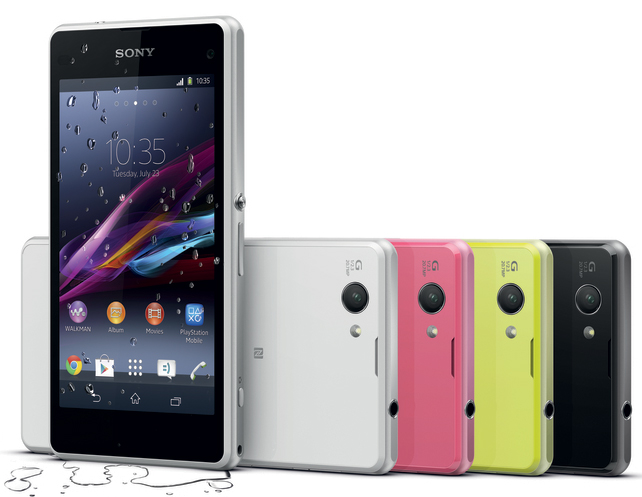 The elusive Sony Z1 Mini has finally been caught at CES 2014 this week and it’s final stage name is the Z1 Compact.

Just like previous rumors of the Sony Z1 Mini suggested, the Z1 Compact has been revealed at CES 2014 as a smaller brother to the original Z1, without any compromises being made. This means that despite the smaller form factor, the Z1 Compact will be just as powerful as the flagship counterpart.

The official specs sheet for the Z1 Compact was released at CES 2014, and it includes a Snapdragon 800 SoC with 2.2GHz processor and Adreno 330 GPU, as well as 2GB of RAM, and the great 20.7MP camera with G-Lens that made the original Z1 range so appealing.

1080P recording is also a breeze with the Z1’s primary camera as it records full HD at 30 frames per second.

Obviously the biggest change for the Z1 Compact is the display, and at CES 2014 Sony announced that the device will come with a 4.3 inch display that has no cuts in quality. The 4.3 inch display uses the same Triluminous technology as the flagship range and comes with a 720P resolution, or 341 PPI.

Our previous speculations about the Sony Z1 Mini were mostly correct, however the device does come with a 2,300mAh battery, which is a little on the low side, despite the 4.3 inch display size.

Sony announced at CES 2014 that the Z1 Compact is set to be released in select markets next month, so far the pricing has not been announced. It will be interesting to see whether Sony manage to keep the mid-ranged mini price structure on the Z1 Compact even though it’s hardware far outperforms any other “mini” device on the market. If it does manage to come close to the price of the Galaxy S4 Mini or HTC One Mini, it will certainly be a steal.