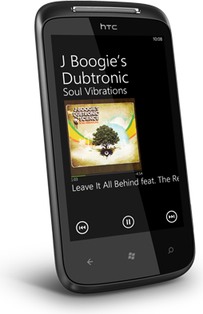 The new HTC Mozart (HTC 7 Mozart) is lined up along with the HTC Trophy and the HTC HD7, which would be the first 3 phones from the touch-phone giant that would be rolled out with the Windows Phone 7 OS. The Windows Phone 7 was announced by Microsoft, earlier this year, and was a much awaited one from the software intellect. It was launched on the Oct 21, 2010 in Europe and Asia, and is to hit the US early next month.

There has been huge hype for the audio capabilities that the Mozart would be featuring. It comes with high-fidelity audio from Dolby Mobile and built-in SRS WOW HD surround speakers. Oops!! Yeah, that’s what you just read. What more. This is expected to be a great hit phone among youngsters, with its huge emphasis to clarity of sound.

No compromises on the looks from HTC, it is a slim, majestic and strong one. At initial glance, the phone appears to be holistic with its intriguing aluminium uni-body design. The front side of the phone features a huge 3.7 inch display with three touch buttons below, that Microsoft has insisted for phones that would run the Windows Phone 7 OS.

The HTC Mozart is to be shipped with a 1GHz Snapdragon processor from Qualcomm, with 8 GB internal memory and has 512 MB ROM, and 576 MB RAM. At about 130g, the phone looks rock solid, gives you the feel of holding a monolithic material something like a crystal or a shell, much like the Apple iPhone 3GS. The phone is equipped with an 8 megapixel camera with a Xenon flash and 720p video recording in HD.

Little more light on the software part of it, the Windows Phone 7 interface looks very professional, and simple without much complication. The start screen would be a perfect organization of tiles of your most necessary applications – texts, calls, calendar, mails, news, weather, and you can customize it for more. With Office Mobile, you get mobile versions of Excel, Word and PowerPoint for Windows documents, and SharePoint Workspace Mobile to stay connected with what’s happening at work. The Windows Phone 7 is a clean perfect release from Microsoft with its IE Mobile, Outlook Mobile, etc.

On the downside, the phone’s 8GB internal memory has been a concern, given its great audio capabilities. Not much is known about the performance, and the battery backup. But considering all its positives, the ‘Windows’ factor and its Dolby audio, it’s a cool gadget to own, a true masterpiece from HTC.