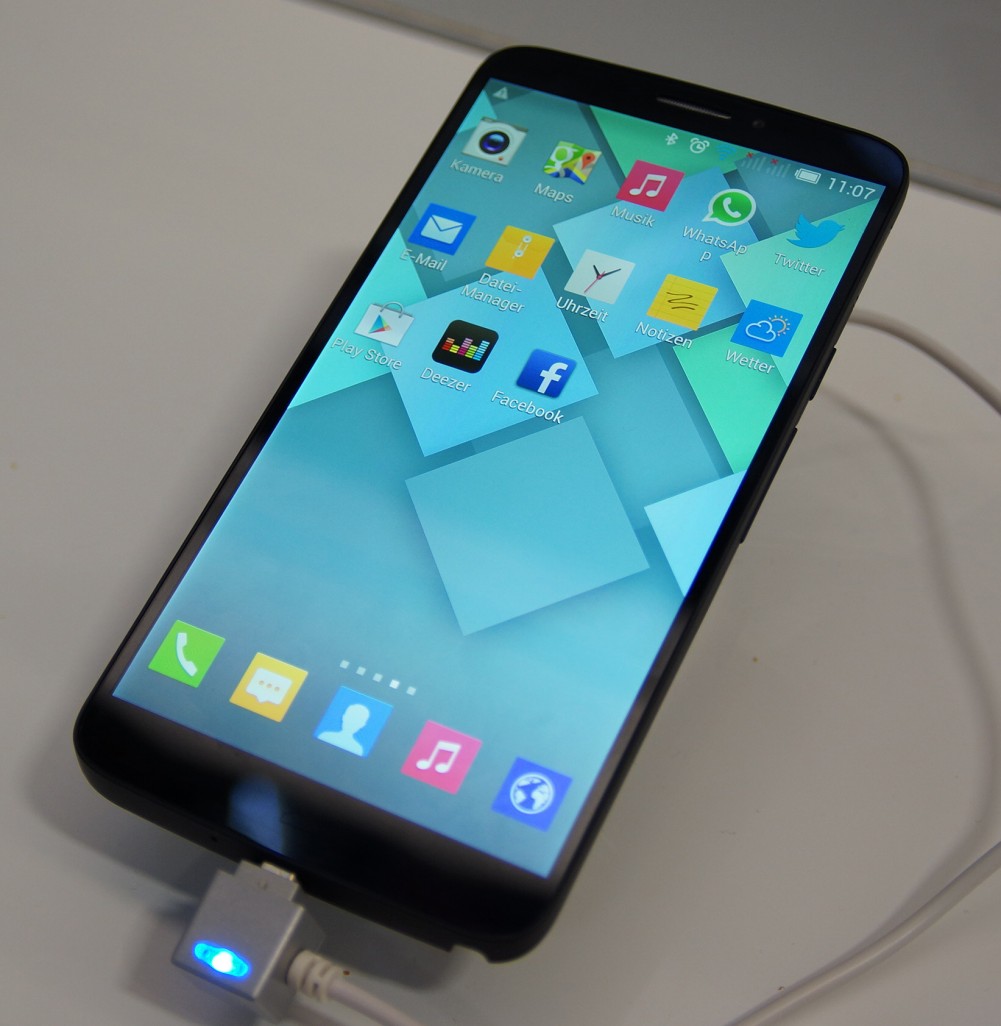 Alcatel is one of the many companies to try and enter the smartphones market, and up until now they were pretty successful in Europe and several other countries with low budget phones that still had a high enough build quality and packed enough features to be useful for the big majority of people.

But it looks like that’s not enough for the company – with the sales going strong, they are also going for the higher end niche, with several handsets that are sure to catch people’s attention. The most interesting product so far seems to be the recently announced OneTouch Hero, which looks great by itself, but is really completed by the rich selection of accessories, which include a stylus, an e-ink back cover, a Bluetooth companion phone and even a desktop stand with a built in pico projector.

Let’s take a closer look and see what you get if you choose to trust Alcatel and go with their high end smartphone.

The One Touch Hero is very well designed and built – something that you can’t say about most of Alcatel’s older smartphones. It’s pretty clear that the company is serious about competing with the likes of Samsung and even Sony, and truth be told, the Hero is no worse than the Galaxy S4 or the cheaper Xperia M, for example. 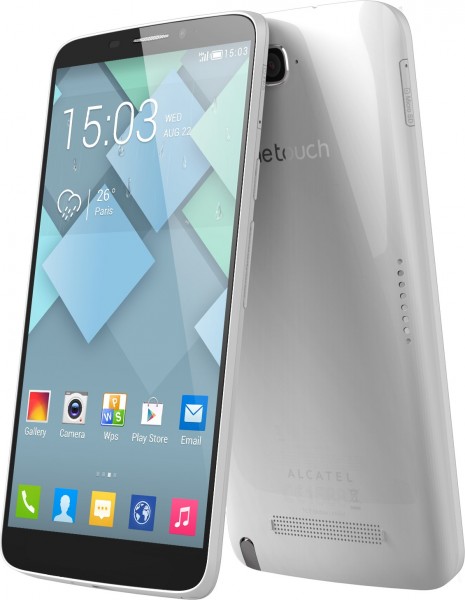 The design reminds a lot of Samsung’s Galaxy smartphones, but then again LG has the same problem (or maybe it’s intentional?) and no one minds it. The front is almost fully taken by the huge 6 inch display, which is covered by a sheet of Gorilla glass and has narrow borders all around – gotta give it to Alcatel, managing to fit this screen inside a 158.5 x 80.6 x 8.5 mm housing is quite a feat and you can see just how little space there was left for the speaker/camera/sensors on top. There are also no navigation buttons at the bottom, which helps in use since you won’t be accidentally touching them.

On the back, there’s the camera and LED flash (which again, look like they’ve been lifted straight from a Galaxy S phone), large speaker grill, the visible metal leads for the dock and flip cover, as well as the stylus housing at the bottom on the left side. It’s a pretty simple monolithic design that works great.

The One Touch Hero definitely has what it takes to be a flagship device. The 6.0 inch display uses an IPS LCD panel that has accurate colors, great viewing angles and excellent brightness, as well as great visibility in outdoors conditions. The 1920×1080 resolution makes everything sharp and crisp and you can’t notice the individual pixels – after all, even at this size the Hero’s screen has a higher pixel density than Apple’s iPhone 5 (367 vs 326 PPI).

For the processing power, Alcatel went with the MediaTek MT6589 platform – admittedly not the best choice for a high end device, but it still packs enough of a punch to make the device useable for any purpose. The One Touch Hero has a quad core processor running at 1.5 GHz, 2048 MB of RAM and a multi core PowerVR SGX544 graphics adapter – as I said, plenty enough for anything (though not quite up to the level of a Snapdragon 600 or 800, of course).

The phone comes with 8 or 16 GB of onboard storage space, but that’s not going to be an issue since it also has a micro SD card slot that accepts 32 and 64 GB cards (which are pretty cheap nowadays and will only get cheaper). There’s also the usual dual camera setup, with a 13 Megapixels shooter on the back and a 2 Megapixels unit on the front, both of which support HD video recording in 1080p resolution and can take some pretty decent photos under normal conditions (not on par with the HTC One and Lumia 1020, though).

The connectivity features list looks rather empty compared to the other new flagship smartphones, which is mostly because of MediaTek’s chipset. There’s only the basic Wifi N, Bluetooth 4.0, GPS, DLNA, HSPA+ 3G (42/5.76 Mbps) and an FM radio tacked on. The Hero has no 4G LTE radio, HDMI out, NFC, Miracast, infrared or low power Bluetooth, which is its major downside.

The One Touch Hero has a rather large 3400 mAh battery, which Alcatel promises should hold up to 18 hours of continuous use – that’s really good, and in line with the best smartphones on the market in terms of battery life.

What the One Touch Hero lacks in built-in hardware, it will make up with external accessories. The phone comes with a stylus hidden inside its housing, and it also has a few unique gadgets that can help extend its functionality. The first one is a companion phone that connects to the Hero via Bluetooth and acts as a phone – it’s pretty convenient for calls, messages, notifications and the like when you don’t want to take the huge (by comparison) smartphone out of your pocket.

The second accessory is a desktop dock/stand with a built in pico projector – it’s really compact and lets you output anything from the phone to a rather large image on any flat surface. It would be really nice if it also worked wirelessly, though. 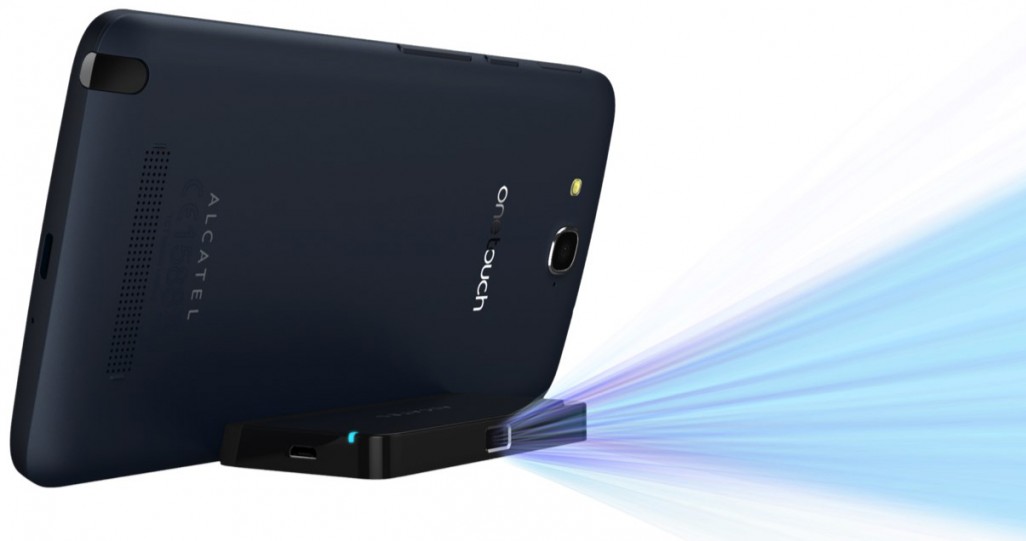 And last but not the least we’ve got not one, not two, but three flip covers that snap into place using eight magnets hidden under the phone’s docking port (the metal leads on the back I already mentioned). One cover has a built in Qi wireless charger (you’ll need to get a separate Qi charging pad, though), the second one has a nice pinhole LED screen that displays the clocks and music EQ (as well as a few other things), and the third one has a built in E-Ink display that is meant to save your battery life when you’re just reading a book, article, viewing/editing your calendar or doing anything for which you don’t really need the color display and high refresh rate – it makes the phone thicker, but the battery life can be pretty much doubled this way!

Alcatel hasn’t put much work into the OS – the One Touch hero runs a standard installation of Android 4.2.2 Jelly Bean – which isn’t a bad thing at all. You can expect it to work fast and smooth, without any stability issues. As always, you can personalize everything to your liking using the many apps on the Google Play store, so you can get a very custom experience in the end.

As for developers and tinkerers, I don’t think the One Touch Hero is the best choice – the MediaTek chipset makes this phone a bad choice for custom ROMs and overclock/undervolting, since the company is not as open with their designs as Qualcomm, for example, and the documentation is lacking.

The Alcatel One Touch Hero is coming to China and Russia first in late November, however the exact date is unknown. The price has not been revealed, either, but it’s expected that the phone will be reasonably priced around $400-500 – that’s for the handset (and stylus) itself, the accessories will cost extra, of course.