If you ask any one: “will Symbian compete with Android?” Then anyone will say: “no chance boss”, but Nokia E7 gave us the answer with it’s new E7 smartphone. Previous Mobile phones from Nokia, which come with S40 and S60 mobile operating system are not that much great and do not give much satisfaction to customers.When Android came into the market, many consumers thought that Symbian is dead and that’s right many opt for Android phones. Android phones are cool and offer more flexibility, better user interface, better functionality, exchange support, multitasking, full touch screen support and lot’s more which make a customer to go for these phones leaving other smart phones behind. Many mobile savvy people express that the Symbian phones are not at all the future, but revoking those Nokia at Nokia world 2010 released its E7 smartphone which is powered by Symbian S^3. This phone is powered by Symbian S^3 which features multi touch, customizable home screens, 4″ AMOLED display, Beautiful build, full QWERTY slide keyboard which is awesome and much more. But still Symbian is not up to Android but i think in the future may compete with Android phones. I will go through all the details about this smartphone and i hope you can make a decision about this Nokia device.

E7 comes with a sleek design and the aluminium case comes in four variants: sky blue, green, orange, black and silver. I definitely prefer silver because its looking at its best. E7 is a predecessor of Nokia N8 which is also not released yet. Nokia E7 comes with full QWERTY keyboard and this is one of the best smartphone keyboard designs. With reasonable space between the keys and with the large space key, you can easily operate the keyboard. We use the keyboard for text and gaming and we can operate with the touch screen which is very responsive. 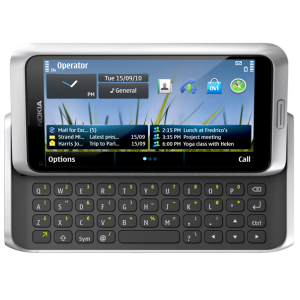 This is the best business smartphone Nokia has ever produced. You will find a button on the bottom of the screen and this button functions as main menu. At any point you can return to the main menu by pressing that button. The screen you see is a 4” AMOLED touch screen which got a brilliant display and produce colors with more contrast. This OLED screen covers overall chasis. 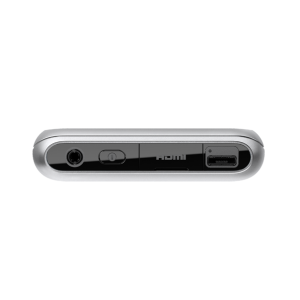 On the top of the device contains one 3.5 mm head phone jack, Power button, a HDMI port to connect your phone to HDMI devices like your LCD Monitors. A mini Usb port is also there to connect to USB drive from which you can play songs/videos or read or write data. 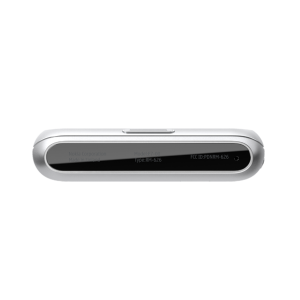 At the bottom of the device you may see Bluetooth, GPS, Wi-Fi (radio) and designers gave a touch like glassy finish.

When viewed in landscape mode at the bottom of the keyboard you find a slide key. When you want to reveal the keyboard you have to slide the key and gently move the screen upward and release it. The movement of the screen from keyboard is easy and no extra push required to move it.

You can see from the below picture how sleek the E7 is and because Qwerty comes into design the device is 13.6 mm thick, but only 4 mm thicker than the iPhone 4 and thinner than even the keyboard-less EVO 4G. 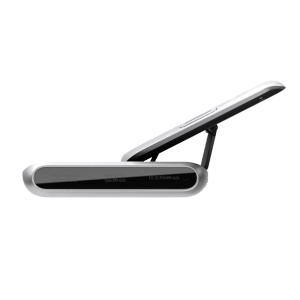 On the side of the phone present a volume rocker, Sim card slot, dedicated camera button. 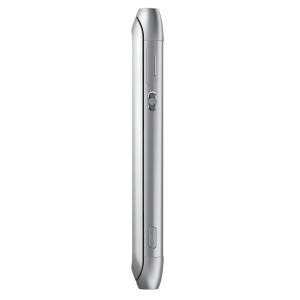 On the back of the device has a 8 mega pixel camera with LED flash and a speaker.

The display of E7 is great with 4” AMOLED display which is clear and displays bright colors. You can also view the screen clearly outdoors and unlike some mobiles can’t view the screen under Sun, you can view .images clearly under Sun also. Nokia has not compromise with the display and this is the better display and you can see the images in contrast. The resolution of this 4” screen is 640×360 pixel with aspect ratio of 16:9 HD can display 16 million colors. 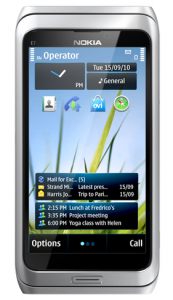 You can view the images with great contrast and videos in HD.

The user interface in S^3 is good, but still not the best from Nokia. Home screen concept is taken from Android and you get three customizable home screens with default widgets, but you can add more. You can re-size the widgets, re-arrange them and customize them. To move from one screen to another you have to wipe the screen, as it usually was. If you want to select options at any point you have to press the screen at that point for some 2 to 3 seconds. Pinch to zoom is also enabled on this phone so when to zoom in you have to move your two fingers away from that point. You can view the images stored in your device in iTunes alike format.

You can type using Qwerty Keyboard or can use onscreen keyboard which is very responsive. It also supports full screen hardwriting that way, that you may type on any part of the screen and device will input the text. The E7 device can recognize Chinese handwriting as well.
E7 comes with capacitive touch screen which responds surprisingly quickly.

E7 is powered by a decent 680 Mhz ARM 11 processor. Even it’s not powered by 1Ghz processor, its 680 Mhz processor still performing very well and all functions are very fast responsive.
E7 has a dedicated 2D/3D graphics hardware accelerator with OpenVG1.1 and OpenGL ES 2.0 support.

256 MB SDRAM and 350 MB of maximum user storage memory is present in the phone. The phone comes with 1GB NANO flash also called as ROM. An internal memory of 16GB is present and you can’t expand the memory using SDCard because there is no option for SDCard. For external storage you have to use the microUSB to connect to a USB device such as pen drive.

Camera:
The decent 8 Mega pixel camera on back of the device can snap images with a maximum resolution of 3264 x 2448 pixels. The quality of the images from camera is great and camera has a 2X digital zoom.Some more features like Auto Exposure, Dual-LED Flash, Exposure Compensation, Face Detection, Full Focus, Full Screen Viewfinder, Geotagging, Red-Eye Reduction, Self Timer, Still Image Editor comes with the camera.

Video:
The camera can produce HD videos at a resolution of 1280 x 720 pixels at 25 fps with up to 3X digital zoom. The pictures taken and videos made with this camera are a lot better in comparison with many other phones.
You can make video calls using front facing camera.
Watch 720P videos on your HDTV Via HDMI connector on the top of the device or watch them on the 4” AMOLED display. This screen is featured with CBD technology so you can watch videos with higher contrast than other touch screen devices.

Browsing:
The Webkit-based browser and Flash lite 4.0 is already installed, so you can browse web with flash content. E7 also supports streaming media.

This phone comes with full support for Exchange mail boxes and office communicator.

You can also edit key office documents on the fly from the phone.

The device is integrated with A-GPS receiver, preloaded with Ovi Maps with free car and pedestrian navigation.
The device also features accelerometer and compass for correct orientation of display.You can download latest Ovi maps for your country from Nokia Ovi suite.
Another navigation feature called Wi-fi positioning is introuduced into this device.

Like iPhone and Android devices, this device has a touch screen and accelerometer to play games. Rich set of games is supported on this device.

If you want to know more about gaming on Nokia E7 you should watch this video.

Great device, we predict huge demand for this gadget, even it’s not an Android driven phone.