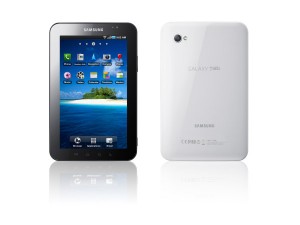 Samsung Galaxy Tab has set up an excellent first impression on every audience and seems as if there is something that iPad needs to worry about. The device is lightweight, attractive and has all the essential features that any tablet PC needs to have.

This is more than just a Tablet PC: its rather a masterpiece that has been developed by one of the most prestigious electronics company from around the world. There is no doubt that the first impression of Samsung Galaxy tag is impressive where the design is sturdy, it supports Flash Video playback as well as 1080p and DivX videos.

You can also use Samsung Galaxy Tab as a phone sending and receiving calls. The device supports 3G networks and the Android based machine is compatible with all the thousands of applications developed by Android Apps. There are certain drawbacks as well with the device but they are not in large numbers to be considered.

There were a lot of stipulations about the iPad being an expanded iPod touch and if you look at the Samsung Galaxy Tab the critical way, you are going to find that this is the expanded version of the Galaxy S from the company. The tablet has a lot more to offer compared to the iPad and we can expect to have a lot from the device. There is little known about the price so far but the company states that the device will be available in the stores across Europe somewhere in October.

A closer look at the technical features:
The best part of this Tablet is Android: it features the latest version of Android precisely version 2.2. Android in combination with the Samsung’s special TouchWiz interface gives this device an excellent edge over the competitors. The display is reasonably smaller than other Tablets in the market but it look good overall with the 7 inch TFT LCD screen.

The thickness of the Galaxy Tab is impressive with just a thickness of around 10mm. It seems more like a book that has fine finish with round and smooth corners. Samsung Galaxy Tab is a combination of Black and White with the front and sides being black and the back glossy white. The back of Tab accommodates a camera, an LED flash to light up your photos and logos that make it look extremely elegant on the whole.

Tab features two cameras, one on each side of the device. The front one is a VGA one dedicated to video calling over 3G networks while the one on the back is 3.2 MP. It comes with additional photography features to create effects on your photo.

The front interface has four buttons on the bezel: one is dedicated to the menu, the second to home, a back button and one for search. The buttons associated with volume and power is placed on the right top of the device.

The device has accelerometer that makes sure the turning of your Tablet’s screen once you turn the direction and most applications allow you to tap or pinch your fingers to zoom in and out. You get to have the on screen tab for screen lock in order to fix the screen orientation.

Performance:
The performance in terms of network is impressive as the 5.76Mbps HSUPA and 7.2Mbps HSDPA power the 3G Internet access. The device also features 802.11 n Wi-Fi capabilities and Bluetooth 3.0 in order to pair with other devices. There has been nothing performed to test the 3G capabilities but the Wi-Fi tests were pretty impressive and came up with prompt replies to all the requests made. The device does not perform sluggish even when you try and open multiple pages in the same browser window.

The device performs perfect even when you try and play Flash videos and out testing showed perfect results. The frame and footage movement was perfect and everything was moving fast on the screen. The device also supports DivX, XviD, MPEG-4, H.263 and H.264 video formats. The high definition playback of 1080p makes it a reasonable pick.

Applications library:
The device is based in Android that sets is open to all the thousands of applications developed for the environment. You get to have dedicated application for some of the Google owned services as well as some of those authored by different app developers around the world. There are some very exotic applications as well such as Google Goggles that use perfect when you work with rear camera. Point the camera to a land mark and the application is going to search for everything relevant to the place on the internet.

The Google Latitude integration lets your friends to keep a track on your movements. There are a lot of other interesting ones available from the Android Market. There are a number of applications available in the Google store as well. The only limitation with most of the applications is the screen resolutions that they are made for. There are a very few of them that are made for 1024x600pixel display as featured by Samsung Galaxy Tab. We hope that this issue will be resolved as there will be more tablets in the market.

You get to have a basic text editor that works on predictive text and voice inputs. The voice dialer also lets you call your contacts by just calling their names. There is an eBook reader also integrated with the Samsung Galaxy Tab known as Reader’s Hub. The application acts much like the Apple’s iBook. It has a complete bookshelf developed and you can scroll through all of them. The Media Hub and Music Hub are other features that set the device to be admired in the world of Tablet PCs.

Samsung Galaxy Tab comes with a number of games as well as office related applications for your convenience and it seems as if Samsung was very keen to make the Tab do good while there will be iPad as the biggest competitor and the Windows 7 tablets will be arriving in the market in no time. The graphics and overall responsive interface makes the device an interesting and admired one.

Connectivity and storage:
One of the most important factors is device storage and connectivity. Samsung Galaxy Tab has an option of 16 GB or 32 GB memory on board for the device and you can always add more to the microSD slot available with the device. The device makes use of the standard sized SIM card and there is nothing like micro SIM to set you in any inconvenience.

You can connect a USB to the device through the 30-pin connector in the base. The Tablet comes with a default docking station where you can charge the device as well as you can connect the tablet with any other device. The HDMI port is another addition to add to your convenience. The dock is annoying as the moment you connect it to the dock, you move to the portrait mode. The officials from Samsung claim that the landscapre version will be coming soon.

Base Line:
The device do come with a lot of exciting features and it seems as if they are going to handle a lot of competition from all the multiple sides but the price tag seems to be of a concern to almost all the people out there. Samsung Galaxy Tab is anticipated by the huge fan base of Samsung out there in the market.