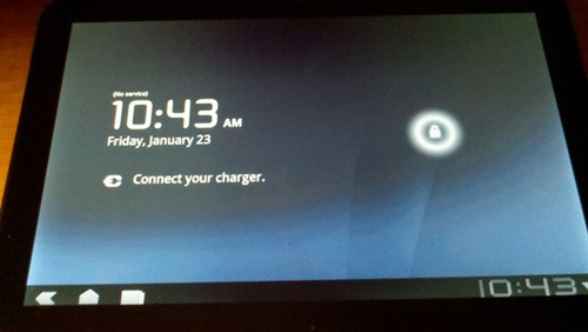 After just announcing the new Android 2.3 Gingerbread operating system update a couple of weeks ago, Google has surprised everyone by demonstrating an even newer version, Android 3.0 Honeycomb, and doing that on an as-of-yet unannounced tablet from Motorola. The device is most probably the much-rumored Stingray, a next-generation tablet based on the NVidia Tegra 2 platform. Andy Rubin, who demoed the new OS, said it will be released “soon”, which most probably means it will be announced at CES 2011, which is due in less than a month now.

The new tablet features a 10 inch screen, and takes full advantage of Android 3.0’s revamped interface, which was redesigned from scratch to support both smartphone screens of 4 inches and smaller and tablet displays that are usually 5 inches (like on the Dell Streak 5) or bigger. Google has already stated that it was an overlook on their part not to do this from the start.

The Stingray’s desktop interface takes a more traditional approach, with the icons and menus being smaller, therefore fitting more information on one screen, as opposed to the current Android tablets like the Galaxy Tab and even the iPad, both of which have the icons and menus a tad too big.

Motorola themselves did not say anything about the tablet, but judging by the amount of rumors, the success of the iPad and this prototype, we can be 99% sure that it will be indeed, released to the public. When it does, the Stingray will be among the most powerful tablets on the market, having a dual core CPU and a very high performance video adapter, courtesy of NVidia’s extensive know-how in the field.

The tablet looks great on the outside, with a slim form factor, thin borders (thinner than the iPad and even the Blackberry Playbook) and a high resolution wide screen. Powered by the tens of thousands of Android apps on the market, it can definitely become a very successful product.

The demonstration didn’t show much, with Honeycomb being in the earliest stage of development, but it did give an overall idea of how the OS will turn out to be. The main change is the support for larger screens, of course, and in order for the third party apps to have the ability to run on any kind of device with any screen size, the developers will get access to a new set of user interface APIs, which will allow them to create 2 separate layouts: one for smartphone screens and one for the bigger tablet displays.

The demo of a new version of Google Maps and NVidia’s 3D technologies (which rendered everything in real time, as the presenter swiped through the streets and the app interface) was definitely impressive, and if the final version will be as good as they say, then we’re off to a good start of 2011.

One of the other defining features of Honeycomb is the lack of need for any external navigation buttons: the usual home, back, search and menu buttons are no longer there. Instead, the user gets a full touch experience, and the navigation buttons can be virtualized on the screen and automatically hidden (or potentially replaced by gestures, if the user wants). This is pretty good news, as the borders can be thinner on all sides, not only three, and the tablet/smartphone can be comfortably used in absolutely any position, making one hand operation easier for devices with 4 inch screens.

As an example, I always find it easier to use my phone upside down with one hand, as I can reach the notification bar and other buttons that are at the top easier with my thumb. I’m sure there are a lot of other people who have the same issue, and the developers did the users a great favor by implementing this feature.

Overall, the demonstration of Android 3.0 Honeycomb and the unofficial Motorola tablet was pretty exciting for both the developers and fans of the OS, and we hope that the end product will not disappoint.