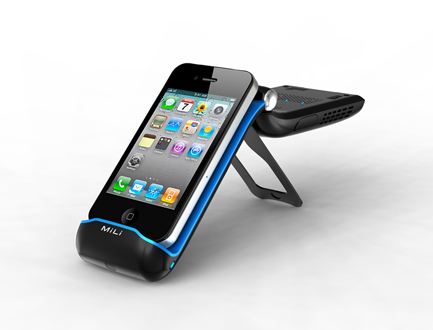 Remember the days when people used to plug in their laptops to huge projectors?”—That’s probably what we’ll be hearing from the next generation seeing more and more products shrink and become portable. Portability is the inevitable trend with netbooks, mobile phones, and more recently, Pico projectors. MiLi is heading toward the right direction with it very own MiLi Power Pico Projector. It’s a chunky portable projector that won’t exactly fit in your pocket, but is easy enough to carry around.

Being originally a battery manufacturer, MiLi has incorporated a lot of energy- related features in this device. Specifically designed for iPods, this projector not only serves as a dock charge but as a battery extender as well. It also has a IJSB port where you could charge other USB charging devices. They claim that this device can last up to 20,000 hours that’s more or less five years if you use the device on a regular basis.

The projector itself is cleverly designed in a way that the top part of it can pivot out to reveal an iPod/iPhone dock inside. It is made with a glossy plastic material, which gives it a sleek finish. Personally, I think there could be room for improvement on the general look but functionality- wise that’s beside the point. The top part encases the lens so the viewing angle could be adjusted. It feels tight and sturdy enough to hold the position.

The buttons are touch-sensitive even if they don’t exactly look that way. It also comes with a remote that’s relatively easy to navigate. There are a few settings that could be adjusted like color balance and contrast, but based from experience, its not needed.

It takes about 3 hours to charge and it lasts about 1½ hours while projecting—which is good enough for a short movie, or maybe three to four episodes of your favorite sitcom. It could last longer when plugged but I wouldn’t really recommend it because the device gets rather hot with prolonged use—which is duly noted in a warning sticker on the back.

The projected display looks gorgeous but has some limitations to it. It has a contrast ratio of 100:1 and a brightness of 10 lumens, which is slightly above the standard among current Pico projectors. It is capable of displaying from 5 to 70 inches but the quality degrades the bigger it gets. At around 5 to 15 inches, it looks absolutely crisp and bright A fair warning though that it is hardly visible when projected in a lit room so make sure you use it in a dark place.
It has built-in speakers that produce decent sound. At higher volume levels though, the sound starts to tear up. It’s good enough for movies when watching with a friend or two but you might want to attach an external set of speakers for clarity.

If you’re not an owner of any of the beloved Apple products, you need not worry because there are other options available. You can find supplementary AV input and VGA cables so you can hook it up to your DVD player, laptop and video camera among others. For curiosity’s sake I tried hooking it up to my old 3rd-gen iPod nano and it works for that as well. I can conclude that if your device has a compatible output as the ones available for the projector, it will most likely work. If your media player only supports HDMI out, you could get an HDMI to VGA/AV adapter but that accessory is sold separately.

When connected to an iPod touch or iPhone, the display shuts down while you navigate through menus or run any application other than the video player. This may be a good thing because it saves on battery life but then that means you would have to give up playing your favorite games on big display. For laptops, it displays the entire screen at a 640×480 VGA resolution. With this resolution, you’re going to want to stick to your standard LCD monitor for your Starcraft 2 or Civilization 5, but at least it’s good enough for movies and simple presentations, which is where the MiLi Pico Projector really shines. A product this feature-packed won’t come in cheap.

The projector itself is cleverly designed in a way that the top part of it can pivot out to reveal an iPod/iPhone dock inside.