Trending
You are at:Home»Gadget Reviews»Qualcomm Toq review – probably the best companion to a smartphone yet
By Gadgetman on Sep 28, 2013 · Gadget Reviews 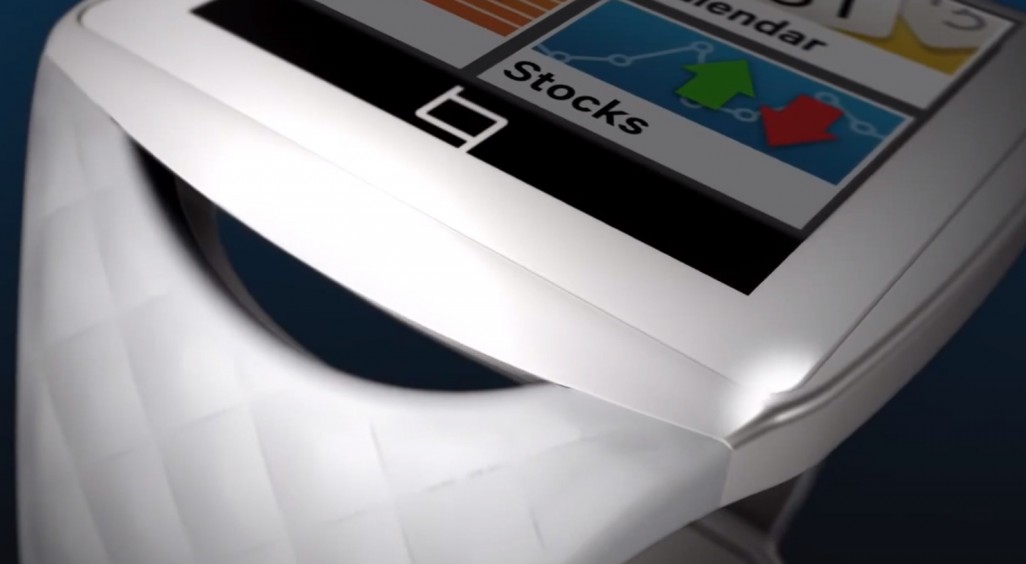 Smart watches started coming out at the end of 2012 from new startups and small factories, with the Pebble being by far the crowd favorite (probably not a surprise since it was completely crowd funded using Kickstarter) and Sony’s Smartwatch coming in at a close second with a higher price and a few extra features.

For some reason, everyone is eagerly expecting Apple to release an “iWatch”, which is supposed to start a whole new mobile revolution just like the iPhone did, but so far the company is silent. The other big player on the market, Samsung, did actually release their own smartwatch, and while it’s quite nice, the limited compatibility (it basically only works with the Galaxy Note 3 for now and will never officially work with any non-Samsung devices) doesn’t make it all that attractive. 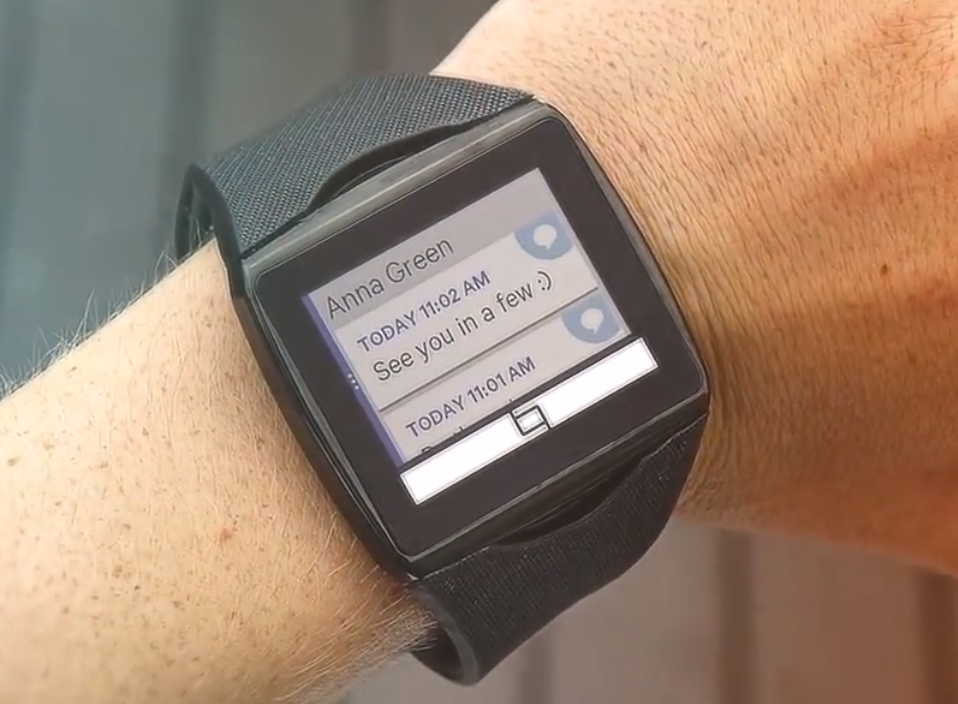 The biggest surprise came from Qualcomm, though – they’ve just announced the Toq, a smartwatch that packs a Mirasol color display that is always on and can last up to 3 days, making it one of the best companions for a smartphone or tablet so far. The watch compares favorably with Samsung’s Gear and Sony’s new Smartwatch 2, so let’s take a closer look and see what exactly it has to offer.

The Qualcomm Toq is averagely sized for a smartwatch – in fact, it is more compact overall than the Galaxy Gear (due to the lack of camera and less powerful hardware). The watch fits perfectly on an average sized wrist, and the rubber band is adjustable to fit almost anyone. The Toq comes in black or white, so there’s not a lot of choice in the external design, but really those two colors are more than enough for 99% of people. 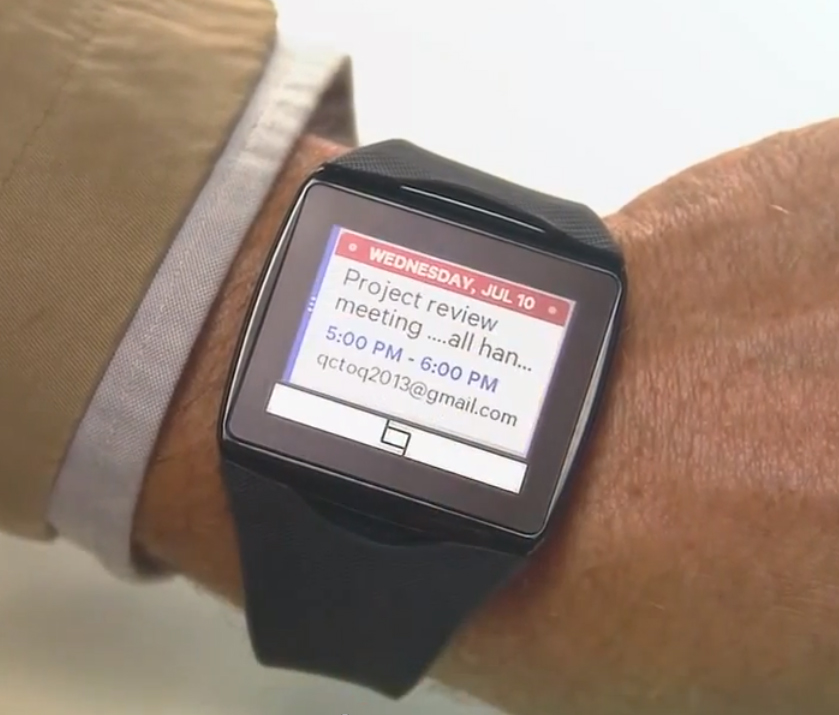 The wristband has a magnetic folding latch that secures the device to your wrist, and the housing itself is fully waterproof – in theory, you could take a shower or go for a swim with the watch, but I doubt you’d want to take the risk with a $300 device. Overall, the Qualcomm Toq is well built and looks and feels great – the company has put a good amount of work into its design and comfort.

The internals of the Toq are nothing to write home about, with the exception of the display, which is Qualcomm’s own Mirasol color panel with a 1.55” diagonal size and a 288×192 pixels resolution – it looks good, not as crisp as Samsung’s Super AMOLED, but decent enough for everyday use. The colors are a bit faded, but that’s to be expected, and the display is very visible outdoors (even in direct sunlight) – that’s the best thing about Mirasol, which was originally created for eBook readers.

The other great thing about the display is that it’s always on and the battery can still last up to 3 days even with heavy usage – something that no other smartwatch can claim. It’s really nice not having to wake the device up manually every time you need to see something on the screen.

The processor is a simple low power Cortex M3 running at 200 MHz, and the Toq uses Bluetooth 4.0 LE to communicate with the paired smartphone or tablet. Charging the device is done exclusively through wireless power – in this case, you get a WiPower LE pad that can fully charge it in about an hour.

That’s about it for the hardware – there are no sensors, no camera, microphone or speakers – it’s purely a visual notification device that’s always on and always with you. In the box, you also get a pair of Bluetooth earphones, which are a great complement for wireless audio that can be controlled from the Toq’s touch screen.

The Toq uses Qualcomm’s own OS, dubbed ThreadX – it has nothing to do with Android, which is a bad thing since it means that the platform will not get a lot of apps anytime soon. But the default apps are good enough for starters – moreover, you do need a smartphone to make the watch useable. For now, the Toq works with any devices running Android 4.0+, but Qualcomm says it’s just a matter of software to make it compatible with the iPhone and Windows Phone. 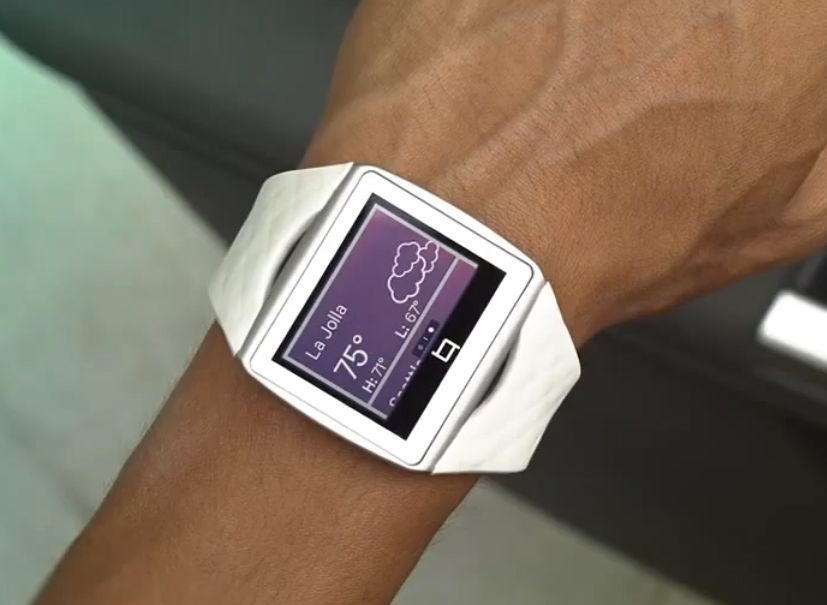 Using the Toq, you can control music, view the latest messages, tweets and Facebook posts, check the weather, see call logs, view system notifications and pretty much any notifications that Android apps create.

The Toq is expected to be released on October 10th in the US – there’s no word on an international release, and the device will be made in low numbers, as it’s more of a market test than an actual entry into the consumer market by Qualcomm. The $300 price makes it an impractical purchase for anyone but early adopters, so the low production volume is justified. Overall, the Toq is the best companion smartwatch yet, mostly owing to its Mirasol display and compact size – it knows what it is and doesn’t try to do more than it needs to, which is a good thing.