Trending
You are at:Home»Gadget Reviews»Samsung Galaxy Gear – is it the smartwatch everyone’s been waiting for?
By Gadgetman on Sep 27, 2013 · Gadget Reviews 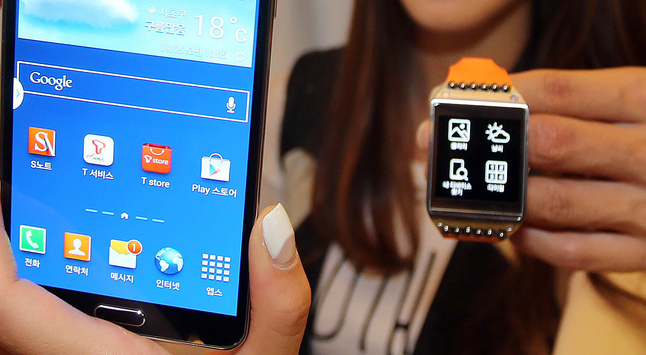 It looks like smartwatches will be the most talked about thing in 2013 and will take over in 2014 – there’s already a large number of companies expressing interest in the market, with Sony, Qualcomm, and now Samsung having already announced or released their own devices (not to mention the already released Pebble and several other low cost smartwatches from smaller companies).

If Apple does release the iWatch and it turns out to be just as game changing as the first iPhone, we can definitely expect to see a surge in new devices and apps next year. Right now, though, Samsung’s new Galaxy Gear is the most advanced smartwatch you can find – let’s take a closer look and see how it performs.

The Galaxy Gear is well made and has a very nice design, with a brushed metal faceplate and rubbery wristband that also houses the camera (so it’s not removable). The wristband is adjustable enough to fit most people’s wrists without trouble, but it doesn’t use any fancy magnets for the latch – it’s the good old pin and hole setup. That’s mostly because the speaker is located on the metal buckle, so a magnet wouldn’t even fit there without making it too bulky. Speaking of which, the Gear is a bit on the thick side with its 11mm, but it pretty narrow at 37mm and very light at 74 grams – that’s way less than the Sony Smartwatch 2’s 122 grams, for example. 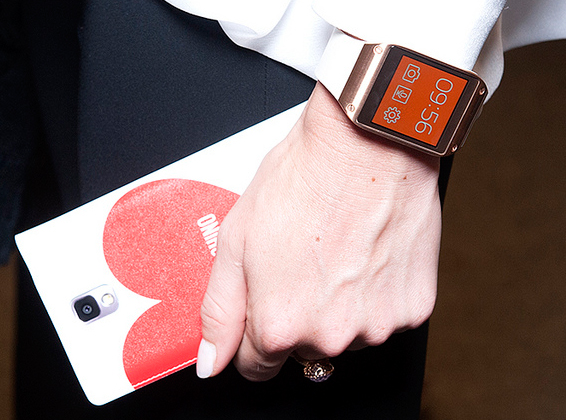 The Galaxy Gear comes in several color variations: yellow, orange, gold, gray, oatmeal and black, all with a slightly differently colored metal faceplate. I don’t know why Samsung hasn’t opted for some less conspicuous colors, it’s as if they think the Gear will be used outdoors for jogging and whatnot. Only the black model will look good everywhere, including a office or business setting (at a meeting, for example).

The Gear has one hardware button on the right side that works as the home button (one click), S Voice launcher (two clicks) and emergency contact notification (three clicks, after which it sends a message of emergency to a preselected contact).

At a first look, the Galaxy Gera sports some very impressive hardware for a smartwatch. It’s got a 1.63 inch Super AMOLED display with a 320×320 resolution, which looks sharp and can be viewed comfortably outdoors. The processor is a single core Samsung Exynos running at 800 MHz and aided by 512 MB of RAM – this may seem like yesteryear specs, but remember that this is a watch-sized device.

Technically, the 800 MHz processor and 512 MB of RAM should be more than enough to run Android comfortably fast, but in reality, the thing is pretty laggy for some reason.

There are 4 GB of onboard memory, half of which is accessible by the user, which is still good enough for most usage scenarios. The Galaxy Gear also has a 1.9 Megapixels camera with a BSI sensor and support for 720p video recording – it should be able to take photos and video at a quality similar to that of Samsung’s front facing cameras on the Galaxy S3 and S4, for example.

There’s also a dual microphone array with noise cancelation and the aforementioned speaker, which means you can issue voice commands to your phone, as well as take and place voice calls without taking your phone out – you’ll need to do that in quiet settings, since the speaker isn’t loud enough to be heard anywhere else (even outside!).

The Galaxy Gear communicates with its paired device via Bluetooth 4.0 LE, and the internal battery is rated for up to 25 hours of continuous use – not bad, but not as good as Qualcomm’s Toq, for example. The battery is charged using a custom charger that connects to the Gear’s 5 exposed metal contacts on the back.

The Galaxy Gear runs a custom version of Android that is pretty limited in what it can do even though the device could technically run a full Android installation without issues, especially an older version like 2.3. Sadly, the OS lags and everything is pretty slow – it’s either a software issue that will be fixed in the final release or it’s the fault of power saving features, which probably throttle the CPU down too much.

The interface is rather simple, with apps and notifications taking up the whole screen and being suspiciously similar to the tiles in Windows Phone. The device comes with several preinstalled apps and you can download up to 10 third party apps, which is a weird limitation. 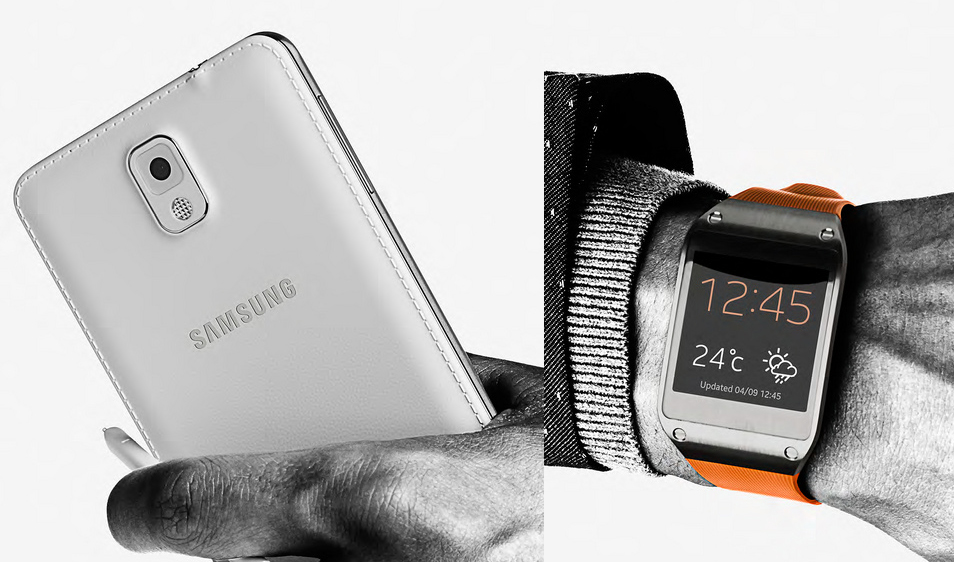 But by far the biggest issue with the device is its limitation to the Galaxy Note 3 – Samsung said they’ll be making it compatible with the Galaxy S3, S4 and Note 2 later on, but that’s not good news for anyone who doesn’t have those smartphones. I don’t see the point of doing this, especially since the competition (the Smartwatch, Pebble, Toq) is fully compatible with any Android devices. I am almost completely sure that people will find a way to “crack” it and make it compatible with any device, it’s just a shame that it won’t be officially endorsed.

The Galaxy Gear is coming out this fall with a $300 price tag – certainly expensive, and not all that useful if you don’t buy a Note 3 along with it. Strangely, Samsung won’t be offering them as a bundle, which would seem like a good idea. The Galaxy Gear is a first generation smartwatch for early adopters, but it definitely could’ve been done better – right now, Sony’s alternative looks more appealing and if Apple does come out with the iWatch, Samsung may be losing this fight.