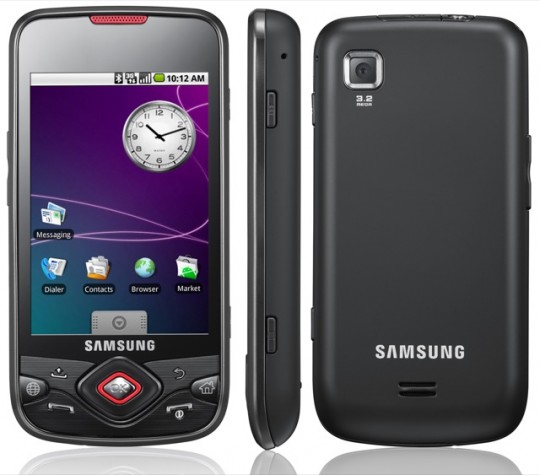 Perhaps the most traditional-looking phone here, the Samsung Galaxy Portal is not unlike the company’s previous handsets with a dash of iPhone 3G. It has a grippy rubberised back and a front that’s domi¬nated by buttons, including a big silver plastic OK button in the middle of its navipad, as much as the relatively modest touchscreen. The black-and-red livery is either smart or a little dated, depending on your point of view. Don’t let these cosmetic concerns, however, put you off what’s otherwise a rather classy handset.

Text composition, a bugbear of many smartphones, is aided by the inclusion of an auto-suggest feature that displays a list of words it believes you may be typing. As a result, we found text entry was noticeably faster on the Galaxy Portal than on some of the other handsets.

The Galaxy Portal starts up to the standard Android cloud scene, with a clock in its centre. An array of standard apps for calls, contacts, web browsing and maps is offered alongside the intriguing Layar — an augmented reality overlay and visual search engine.

Point the Portal’s 3.2Mp camera lens at an object and the Layar processor attempts to make sense of it. You can identify fellow Twitter users in the area, for example, and see their tweets. Layar also tries to identify what you can see in the image, some of which is done through partnerships with hotels, restaurants, and transport and entertain¬ment companies.

We had mixed results. Pointing the Portal at the British Library, for example, having typed in the search term ‘library’, failed to bring up the location of this or any other nearby public libraries. Still, this is a highly ambitious and demanding technology, and we dare say tests in other locations will prove more successful, especially as time goes on

As an additional navigation aid, this fea¬ture has potential. More than anything, though, it served to showcase the quality of the Samsung’s display and the perfor¬mance of the hardware. The Portal uses an 800MHz ARM CPU and offers 3.5G HSDPA mobile internet at up to 7.2Mbps (megabits per second). Its quad-band GSM, Wi-Fi and Bluetooth connectivity mark it out as an Android 2.1 device.

Design-wise, we had a few issues with this phone. The screen was set to auto-lock after a few seconds, and we spent far too much time pressing the hardware Unlock button. This was easily adjusted via easy-to-find options, but we still think there are better-looking hard¬ware controls, and the standard Android menu isn’t all that appealing.

This is a solid Android 2.1 smart¬phone that offers some interesting features but doesn’t quite pull things off in the style stakes. We can’t fault the Galaxy Portal’s speed or screen, however.