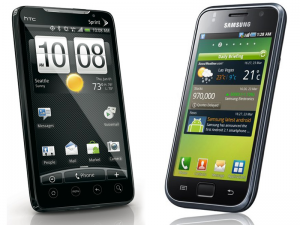 HTC and Samsung are both big players on the Android smartphones market, and they both have some pretty good offers for any kind of users, from usual consumers who will use their phone for entertainment, web surfing and texting, to professionals who want the ability to manage their time, money and projects anywhere, anytime.

The top of the line smartphones are the Galaxy S and EVO 4G, from Samsung and HTC respectively, and even though their successors have already been announced, it’ll be a long time before they can be considered outdated and not worth buying. In fact, right now, these two phones have the best price/features/performance ratio on the market, and you can easily buy either of them as your primary mobile device for the next 2-3 years. But which one should you choose?
To help you with that, here is a short comparison between these two smartphones.

Exterior
On the outside, both the Galaxy S and Evo 4G look pretty good, if not standard: they have the usual slab form factor with the touch screen and the navigation buttons covering the front. The only major difference here is the presence of an optical scrolling device on the Galaxy S and the lack of any scrolling means on the Evo 4G. The scrolling device can be really useful when editing text documents or in games, and the lack of it could be noticeable for everyone who is used to having one on their phone.

Display
The display is the main difference between the EVO 4G and the Galaxy S, but despite the hype around the big 4.3 inches mammoth on the former, you won’t see that much of a change when going from it to the Samsung’s 4 inch Super AMOLED unit. In fact, the Galaxy S is already at the size limit for comfortable one hand use, and the additional 0.3 inches on the Evo clearly go over that line. It is pretty difficult to use it with one hand, that’s what I’m saying. Getting it out of the pocket and checking an email on the go is very hard to do, especially when you’re walking down a street. The resolution is the same on both devices, but the Galaxy S is better at color reproduction (the black levels are better and it can display 16 million colors, as opposed to the 65536 on the Evo). Surfing the Web and watching movies is the only area where the Evo 4G is marginally better.

Performance
The performance is pretty much the same on both devices, but the Galaxy S is faster in games and other 3D applications thanks to the superior video graphics adapter in the Samsung Hummingbird SoC. The Snapdragon in the EVO 4G is definitely not a sloth though, and you’ll notice no difference in everyday use, unless you pay a lot of attention. Both smartphones have the same amount of RAM at 512 MB.

Storage Space
There is quite a big difference between the Galaxy S and the Evo 4G when it comes to storage space: the Samsung not only comes with 16 GB of internal memory, but also has a micro SD card slot, which you can use to get up to 32 GB more space (a 32 GB class 4 card is currently about $80). The Evo 4G has only 1 GB of ROM and no internal memory for your data, but it does come with an 8 GB card in the micro SD slot, which can later be changed with a 16 or 32 GB one.

Hardware
Other important hardware specs are pretty much the same, with both smartphones having support for Wifi N, Bluetooth 2.1 EDR, 720p HD video shooting, GPS, and others. The camera on the EVO 4G is 8 megapixels and it seems to be slightly better than the 5 megapixels one in the Galaxy S, so if you want to replace your point-and-shoot, the Evo might be a better choice. The big difference in connectivity is of course, the support for WiMAX networks in the EVO 4G, which was a first in the US when the device was first released.

Software
Both the Galaxy S and the Evo 4G run Android, and both have the 2.2 upgrade, with the main difference being the custom TouchWiz interface on the Samsung and the HTC Sense (which is better, IMO) on the Evo. The HTC is also better for developers and tech savvy users who want more control over their phone, as it is easier to root and flash custom ROMs on the Evo 4G (plus, there are more ROMs to choose from).

Conclusion
The Samsung Galaxy S and the HTC Evo 4G are both great smartphones, and can easily be used for everyday tasks and even as business tools. But as this review shows, the Galaxy S is clearly the better of the two, with a lot of advantages over the EVO 4G. It’s more comfortable to hold, has a better screen, more memory, it’s faster and it has a navigational pad – these are all important features that make a difference in real world usage. The EVO 4G is just a bit better at displaying Web sites and has a slightly better camera – in my opinion, that is not enough to choose it over the other smartphone