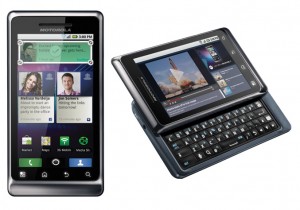 There are quite a lot of smartphones on the market, most of them running on Android and recently, Windows Phone 7 (and of course, there’s the iPhone). This makes it difficult to choose one that would suit you best, even though the wide range of choices should theoretically make it easier.

But things aren’t so good when it comes to smartphones with full QWERTY keyboard, which are almost a necessity if you want to use your phone for more than surfing the web, reading emails and playing games. There is a visible lack of competition in this smartphone niche – you can literally count all of the current QWERTY smartphones on one hand.

The reasons aren’t very clear, but it’s probably because it’s easier and cheaper to make keyboardless smartphones and not many people use their phone’s to the full extent anyway. Regardless, if you need a good smartphone with a full QWERTY keyboard, the best choices as of January 2011 are the HTC Desire Z (aka T-Mobile G2 in the US) and Motorola Milestone 2 (Droid 2 in the US).

These are basically the only modern smartphones that are great performance-wise. The other choices include the first Milestone, which isn’t too bad, but already old and the G1, Touch Pro 2 and E90, all of which are already outdated and can’t even playback videos properly.

If you already took a look at both the Desire Z and the Milestone 2, you’ve already noticed that they’re pretty similar and you don’t know which one you should choose. At first look, the Milestone 2 seems better (it has a higher resolution display, slimmer case, faster processor), but if you take a closer look, you’ll see that is not really the case. While these two phones are pretty close in terms of quality, features and performance, there are some key differences that can make one or the other the best for you.

The HTC Desire Z/T-Mobile G2 is the best choice for people who want the fastest and most powerful smartphone possible for anything from office apps to web browsing and games and who like to flash custom ROMs on their devices or at least have the freedom to do whatever they want with the software on the phone.

The Desire Z is equipped with a next generation processor from Qualcomm, which is faster than current 1 GHz CPUs even when running at 800 MHz. It also consumes less power than current solutions, including the chip inside the Milestone 2. It is also easy to unlock for developers and tech-savvy users to do whatever they want with it.

The Motorola Milestone 2, on the other hand, comes with an older generation processor, which is still fast enough for any apps you might want to run, but also consumes more power. The main gripe with the software part of the Milestone 2 is the locked bootloader, which does not allow the user to flash their own ROMs or any unofficial software updates and fixes. This severely limits the device for developer use and means that if Motorola decides that the phone will not get the 3.0 update (which it probably won’t, actually), the user will be stuck with an old OS, even though the phone will be perfectly capable of running the newest versions. And most importantly, the user will be stuck with the Motoblur skin, which can’t be removed or changed (well, there are a few ways to do it, but they’re hard and the result is very buggy).

The QWERTY keyboard is also much better on the HTC Desire Z, as many users have noted. While the Milestone has a good keyboard, the keys are flat and have a very “mushy” feeling to them, making it hard to type long documents. The G2 has an almost perfect keyboard for a smartphone: the keys are large, there is a lot of space between them, they’re raised just enough to be comfortable and are very easy to use. The Milestone 2 does have a small advantage with its arrow keys, which might be better for games than remapping some of the keys on the Desire Z.

In conclusion, if you don’t think you’ll need to flash custom ROMs or change anything in the main system, the Milestone 2 is a great phone, but if you want a better keyboard, battery life and more freedom, the Desire Z is a better choice, even though the screen has a slightly smaller resolution.