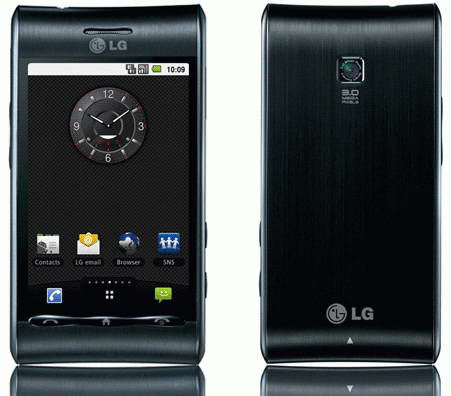 Running Android 1.6 Donut rather than the newer Eclair version, the LG Optimus Swift GT540 still offers plenty to entice smartphone buyers. It has a resistive touchscreen rather than capacitive, but at just £120 this handset will win plenty of fans.

The brushed-metal-effect Optimus barely tips the scales at 118g, yet its finish feels far less prone to damage than some expensive handsets. A wiggly curved insert at the very bottom of the front panel makes it easy to locate the hardware call, power and home buttons without having to look. Pressing anywhere along this strip causes these buttons to light up, while sliding a finger across from left to right unlocks the keypad.

We found the onscreen icons rather small, which is even more of an issue with a touchscreen than on a conventional display. As a result, when investigating the contents of the Applications menu we kept inadvertently launching features.

However, it was easy to manage connections and to get around the set-tings menus using the Android button. Here you can change the wallpaper and add shortcuts and widgets, but also invoke a search or adjust settings for synchronizing data and the like.

Existing contacts {but not favourites) and text messages were automatically imported into the LG’s memory. The search feature narrows down the list of names you might be trying to call.

Call quality was very good, and the phone didn’t get hot even after we’d been chatting for half an hour. We noticed it juddered a little, though, as if we were triggering one of the haptic sensors. Importantly, it feels very natural holding the LG in your hand and up to your ear.

Web surfing was an acceptable experience, even without support for multitouch pinch-and-zoom gestures. There’s an incremental zoom if you need a close-up view of anything, while the clear and crisp screen ensures the text on web pages is easily legible.

To take a photo using the Swift’s 3Mp camera, record video or play music you’ll need a microSD card, although there’s 130MB of internal memory. A nice addition is the FM radio, for which you can simply plug in the supplied earphones – or better ones of your own – and press the On button before scrolling to tune in. Six channels can be selected as presets.

The LG’s battery was good for more than two days of heavy-duty use, including plenty of chat and web surfing. It lasted around four to five days of more typical use. Overall, we didn’t have to recharge the Swift anywhere near as frequently as an iPhone 3G.
This is a truly likable smartphone that we’d happily recommend to friends. You’ll be hard pushed to find a neater, sleeker Android phone for the price -and the long battery life is a bonus.