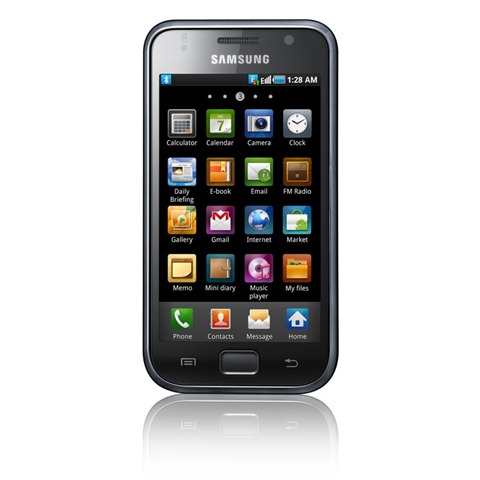 Samsung clearly had the Apple iPhone in its sights when designing this sleek ‘candybar’ handset. It’s almost identical in size to the 3GS and mimics its chrome-trimmed black exterior. But it’s lighter, at 119g, and has a brighter 4in AMOLED touchscreen.

The screen not only makes colours vivid and bright, it’s also very responsive. Swiping to unlock the phone or answer calls becomes second nature, while multi-touch lets you pinch to zoom in and out. The onscreen qwerty keyboard, best in landscape, has an alphanumeric option.

Android Eclair syncs social media and email. Samsung pre-installs an ebook reader and ThinkFree Office, along with a built-in facility to play media files from the phone through other devices. The 8GB internal memory can be expanded with a microSD card of up to 32GB.

We loved the endlessly customisable, seven-screen interface. A touch-sensitive button opens app Settings while the cen¬tral control button closes it. In common with other Android 2.1+ devices, tapping the Galaxy S’ screen sets the focus for the 5Mp camera. There are scene modes, blink detection and anti-shake, plus effects, exposure and white balance.

The GPS was quick to pinpoint our location in Google Maps and Navigation effective. The 3G signal was fine, but web browsing hit the battery hard: we got just over 24 hours of life between charges.

Overall, the range of features and superb screen make this a real Apple biter.