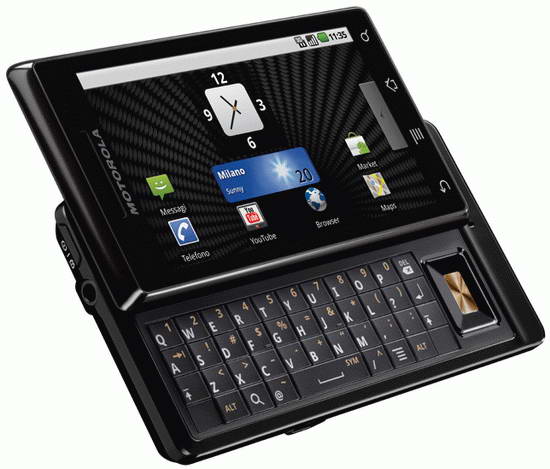 Visually, the Motorola Milestone 2 hasn’t changed much from its original incarnation. It’s exactly the same size and shape as the original Milestone (or ‘Droid’ in the US), measur¬ing 60x116x14mm and weighing 169g.

This sleek black and chrome smart¬phone has retained its 3.7in touchscreen display, which supports multitouch, as well as the slide-out qwerty keyboard. However, while the device might initially look the same, Motorola has made some changes for the better.

To begin with, the four-way controller on the keyboard has been ditched in favour of four cursor keys, making the other keys larger. They’ve been raised too.
We found the touchscreen was very responsive and needed only the lightest of touches. The keyboard keys are on the hard side, and not as comfortable for typing as we’d have hoped, but they’ll be a welcome addition for those who struggle with the size of onscreen keypads.

The Milestone 2 now features a 1GHz processor, providing a fair jump in speed compared to the original 550MHz chip. This makes the device faster at processing commands and loading software.

This Motorola runs the latest version of the Google Android OS, version 2.2 {‘Froyo’). Among the new features sup¬ported are Adobe Flash Player and voice-to-text controls. To compose emails or text messages this way you just press the microphone icon and start speaking your message. The phone will translate your voice into text, so you don’t have to worry about the accuracy of your typing. Another helpful solution for business users is a text message business.

The theoretical benefit of this facility is clear, but in practice we found voice-to-text fairly slow at translating what we said. The results weren’t always a success, although that might be down to this reviewer’s south London accent. While we like the feature in principle, we do think it’s more suited to occasional short text messages than long emails.

The Wi-Fi implementation has been updated to ensure the handset now sup-ports the latest standards. Motorola also gives users the ability to turn their handset into a 3G hotspot: when Wi-Fi connectivity is turned on, up to five devices can connect to the phone and access the web through its 3G connec-tion, network permitting.

Like its predecessor, the Milestone 2 supports microSD cards up to 32GB, but with a larger internal memory (8GB) users can get a total of 40GB. This means there’s plenty of room to store pics snapped on the phone’s 5Mp camera, which comes with a dual LED flash and autofocus.

The images we captured were clear and sharp, pretty much what we’ve come to expect from today’s smart¬phones. You’ll also find image stabilisation, real-time colour effects, geo-tagging, and basic in-phone edit¬ing functions such as crop and rotate.

The Connected Media Player displays song lyrics and artist informa¬tion for a track that’s being played. There’s no FM radio, but via 3G or Wi-Fi you can use the Milestone 2 to listen to internet radio stations.

Another neat feature that’s unique to Motorola phones is Motoblur. This service, also seen on the Defy, lets you get updates from your various social networking accounts and online photo services – Facebook, Twitter, MySpace and so on – plus your Outlook email and webmail, and sychronise the lot.
This new model has some wel¬come improvements. Faster and with even more useful functions for both business and social networking, the Milestone 2 is a great Android phone.