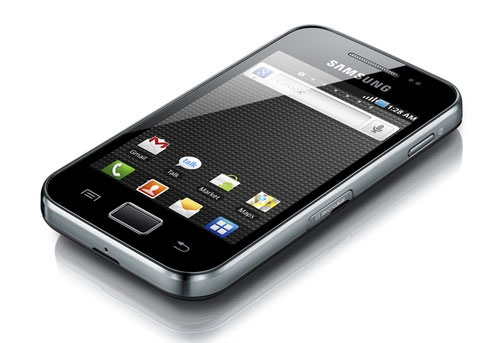 The Samsung Galaxy Ace s5830 was first announced in January 2011 and released in February. The smartphone is quickly making a name for itself due to its power and Android operating system. With a sleek, slim design the Samsung Galaxy Ace s5830 easily fits in your pocket as well as your lifestyle. The most notable feature, however, is the phones strong resemblance to the iPhone 4.

With a slim, sleek design, the new Samsung Galaxy Ace s5830 is well sought after for its capabilities as a smartphone as well as its convenience in size. Measuring 112.4 x 59.9 x 11.5 mm (4.4 x 2.4 x .5 inches) the cell phone weighs 113 grams (4 ounces); the lightweight phone is easy to hold, transport and fits comfortably for those on the go. Featuring a fully integrated social networking hub, users can easily keep track of their Facebook, Twitter, MySpace and email accounts with a convenient one page layout.

The phone boasts touch screen capabilities and the screen has plenty of visibility and provides easy viewing in direct sunlight. Though the screen doesn’t feature light sensors you’ll find that you can easily conduct your conversations or keep track of your social media networking sites with the phone.

On the bottom of the phone’s display you’ll find the menu and back buttons. These are adjacent to the hardware home key. You can easily switch tasks by pressing the home key and sustaining the button. Users can adjust the volume on the left side of the phone and the power on off; lock key is located on the right side. Those who are familiar with Samsung smartphones will find the design of the Galaxy Ace s5830 is similar to that of other Samsung smartphones.

Powered by Android 2.2 Froyo, the Samsung Galaxy Ace s5380 has 158 MB of storage and an 800 MHz ARM 11 processor giving Ace the speed needed to get all of the tasks used in today’s society accomplished. From editing documents and images to accessing the Internet, using online maps, uploading and downloading videos and using photo programs like Picasa, you can conveniently use the Ace for your personal and business needs. The Samsung Galaxy Ace s5830 is considered one of the top Samsung smartphones on the market. Standard Android applications come with the phone.

The phone’s greatest feature is undoubtedly its large touch screen measuring 3.5 inches. With an HVGA 320 x 480 pixels resolution, the Ace provides easy viewing and clear imaging. As far as photos go, you’re all set with the five megapixel camera, enhanced with LED flash and 2x zoom capabilities. Those who are looking for high end video may be disappointed, however, as the Ace features QBGA video. The camera also doesn’t include support for DivX/Xvid video and the camera doesn’t include a shutter key.