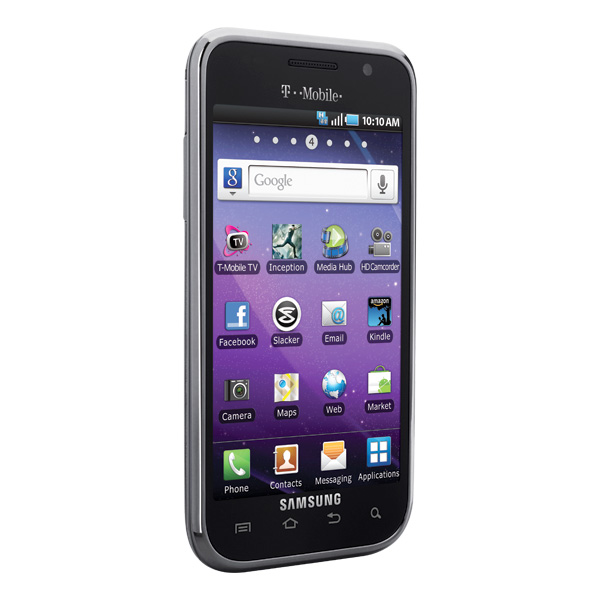 With a 1 GHZ dual core SoC process and Nvidia Tegra 2, the Samsung Galaxy S 4G is perfect for handling your data transactions, video conferencing, photos, downloading and uploading. The 4G connectivity ensures that you have fast downloads and uploads without worrying about slow connections. The phone features a five megapixel camera, however, it doesn’t have flash, so this is a drawback. It also has a video player. Internal memory includes 512 MB RAM, 1 GB ROM, expandable memory up to 32GB memory card and a 16GB micro SD card is included. The processor speed is 1GHz.

In addition to the mobile features and video and photo capabilities, the Samsung Galaxy S 4G features a media hub that includes T-Mobile TV. This will let users watch live television shows through their smartphone and includes TV on demand. Using T-Mobile TV is easy and you can access the program through the 4” Super Amoled display that provides easy visibility with crisp, vivid images.

The screen is clear and smooth and you’ll find that movements are fluid. Finding different apps is simple with the Samsung Galaxy S 4G as well. To access T-Mobile TV, choose applications then T-Mobile TV and make sure that you agree to the terms and conditions. You’ll need to turn off Wi-Fi for the first set up, then after the program is enabled you can choose either Wi-Fi or cellular networks for live TV viewing or on demand programming. You can also use the T-Mobile TV hub to watch programs from your selected media. The Samsung Galaxy S 4G is preloaded with the hit film Inception as well.

Those who wish to make phone calls over a Wi-Fi network can do so easily with the Samsung Galaxy S 4G. You can easily turn Wi-Fi on or off through the touch screen. Turning the program on is simple, just touch applications then choose Wi-Fi calling. You can activate it through the Wi-Fi settings and then use the slider at the bottom to activate Wi-Fi calling. It’s important to remember that when you use your Samsung Galaxy S 4G on Wi-Fi, you are still using minutes for your phone. Other features in the phone include mobile email, mobile web, html web, GPS and social networking.

With so many options to choose from and blazing fast speed, there is no doubt that the Samsung Galaxy S 4G is going to be a huge success.