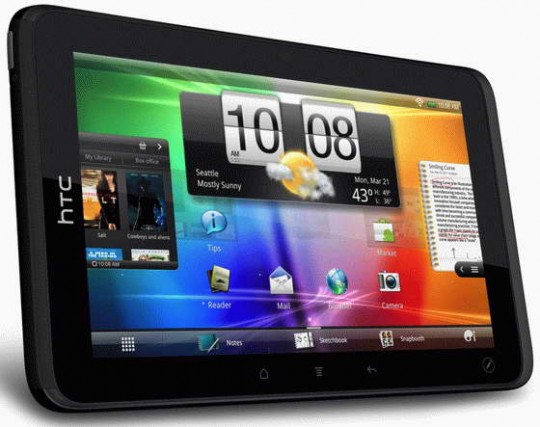 HTC seems to have finally got back on track with the release of competitive devices that have the power and looks to take on any other smartphone or tablet company around. While it’s true that the Thunderbolt was a pretty big disappointment, the other smartphones presented after it were nothing but great.

And HTC didn’t stop at smartphones, either. They seem to have finally seen the potential of tablets and tablet computing, and have demonstrated their first tablet – the Evo View 4G, which is of course running Android and has the newest hardware inside, which will allow the users to run any kind of application they want. The HTC EVO View 4G has actually been demoed way back at MWC 2011, under the name HTC Flyer, but has since undergone some changes, mostly on the inside, to keep up with the times.

The Evo View 4G looks like an oversized version of HTC’s other smartphones like the other EVO’s and the Desire HD, for example. It has the same rounded edges and bright red accents on the inside, with the main difference being of course in the big 7 inch, 1024×600 pixels wide screen. The device is very easy to hold and use thanks to the generous borders, and if you flip it between portrait and landscape modes, you’ll see that there are actually 2 groups of navigation buttons (home, back and return), one for each mode, so you always have them at the bottom in the right position. 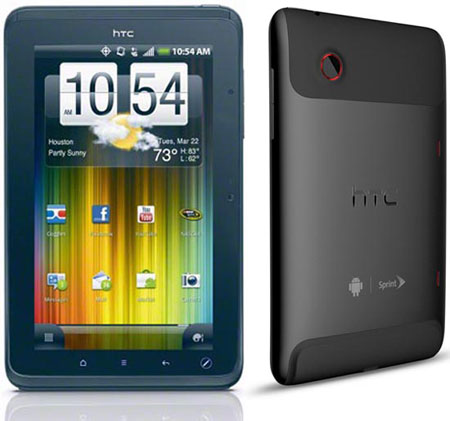 The Evo View 4G is also one of the most powerful tablets on the market, despite its size. On the inside you’ll find the new dual core Qualcomm Snapdragon (3rd generation) running at 1.5 GHz, so clock-wise it’s faster than anything else on the market. The video graphics adapter is also improved, the new Adreno solution is supposed to be 3-4 times faster than the one in the older 1 GHz Snapdragon CPU’s.

Sure enough, there is a full 1 GB of DDR2 RAM to support the powerful processor, and the tablet has 32 GB of internal storage memory, as well as a microSD card slot, which you can use to add another 1-32 GB of memory. Of course, you’ve got all your other standard technologies, including Wifi N, Bluetooth 3.0, GPS, two cameras for pictures, HD video and video calling and more. The battery is a big 4000 mAh unit, which should last through a full day without a doubt.

The software and the special features

The Evo View 4G will be running Android 2.3 Gingerbread, which will be updated to Honeycomb within a few months, and will feature HTC’s new Sense UI (with 3D effects and animations and all). However, if there’s one thing that makes the Evo View 4G stand above any other tablets it is the support for HTC Scribe, which allows you to take hand-written notes and drawings using the optional Scribe Pen (which really should come with the device).

If you are a student or a business professional, or you simply want to make the most out of your new tablet, the ability to write down anything you want using a pen will definitely allow you to do that. The Scribe Pen works very well on the capacitive screen, and the smart software makes it very easy to take notes, screenshots of anything and record audio.

One interesting feature is the ability to tie certain written notes or web page screenshots with a specific point in an audio recording. This is extremely useful when you’re recording something in a meeting or classroom and want to save any ideas or thoughts that you have at the moment (that’s actually how our brain works, so it feels very natural and intuitive). This feature alone makes the Evo View 4G worth buying, in my opinion.

The new HTC tablet will be coming to Sprint this summer, and hopefully it will have a normal price (cheaper than the iPad 2). If that is the case, I think it can become the number one device for students, journalists, entrepreneurs and anyone who needs to store a lot of information and have it easily available at any time.