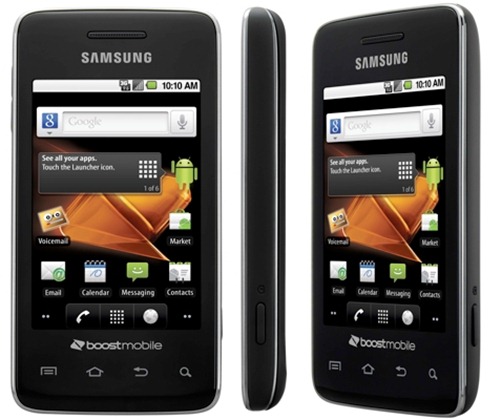 Over the past few years we have seen a large number of ‘forgettable’ devices making it onto the scene running on Google’s Android operating system. We feel that the Samsung Prevail may very well have been one of these devices, had it not been for its price tag!

The Prevail was announced with its 3.2-inch touchscreen device, this in a time when 4.3-inch screens are the norm. Looking at the front of the device, one immediately notices the wide empty bands of empty space at the top and the bottom of the device, which is used to house the logos of Samsung and Boost Mobile.

Due to the Android operating system, the familiar menu, home, return and search icons are arranged in the same order as they are on any other Samsung Android device.

The device consists of a shiny band lining the sides of the device and surrounding the lens and 3.5mm headphone jack. This shiny band is made of plastic, instead of any type of metal. 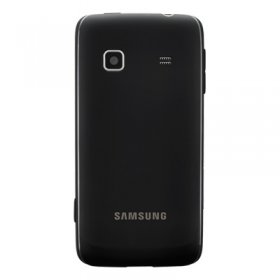 The backside of the device consists of a soft, satiny material – which is an odd match for the rubber port cover shielding the microSD slot on the lower left edge of the phone.

The volume rocker, camera launch key and tiny power button all have a similar rubbery feel to them.

At the back of the device, the 2-megapixel camera and speaker are both located at the top.

The whole look and feel of the device all too much reminds us of a cheap-manufactures phone, which was raced just to get it available on the market.

Although the device’s screen displayed vibrant colors, the touch experience was totally inconsistent. We found that the screen responded immediately at times, while other times the screen just dragged as we scrolled through web pages. We also found that the display was totally overly sensitive. We found a number of times ourselves tapping an incorrect link, selecting wrong pinpoints on maps and much more!

The device consists of an 800MHz Qualcomm processor and this was noticeably more sluggish than that of the dual-core 1GHz chips fitted in the majority of the latest smartphones.

Call quality was no better either. Sounds on our end often sounded distant and muffled. Ending calls are not as easy as one would have hoped. In order to end a call, the user needs to press the lock button and then swipe a red ribbon across the screen. 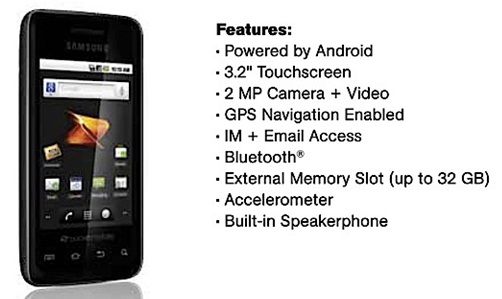 The Prevail comes with a low-resolution 2-megapixel camera. The device surprised us with accurate colors and minimal shutter lag. We did find that the camera is quite useless for shooting close-up shots.

As mentioned earlier, the Prevail runs on Android Froyo (2.2), which means that this device will come with Flash support, WiFi tethering and improved Exchange integration. One will also immediately notice that there are no widgets cluttering the home screen. Users will also find that Samsung has made some changes to the applications. On this device, Google Calendar will have a black – instead of a white – background.

The Gmail app and stock browser appeared to have not been modified. We also found that once we added our Gmail accounts, the apps have not been synced as with other Android phones.

The device also comes with the Swype keyboard as the default input method. This technology was developed for the disabled where the user type by drawing a line between letters on an onscreen QWERTY keyboard.

The device is available on retail at a price of $180.

Buying a smartphone, off-contract, is not a cheap experience, with prices usually ranging from $500 and up. The $180 price tag on the Prevail makes it attractive, but one just cannot detach the fact of a plastic-finish phone with a low-resolution camera from it.

So, for those who simply cannot afford an expensive decent smartphone, the Prevail may be your best option of owning a smartphone running on Android.