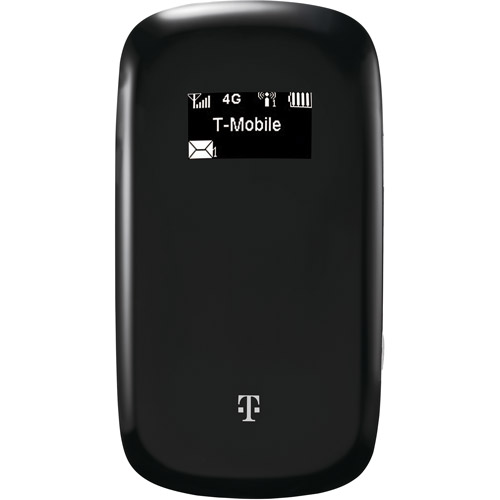 It has been just over two years since T-Mobile started selling its first MiFi device and now the company is dipping its fingers into the mobile hotspot technology market with its 4G Mobile Hotspot, which packs an HSPA+ radio and doubles as a USB storage device.

As an HSPA+ device it claims slower rates that a true 4G device that runs on LTE or WiMAX networks, but typical 8Mbps download speeds should hardly be a deal-breaker for those who are interested in paying less for the hotspot and the data plans accompanying it.

Many people may, infact, mistaken the Hotspot for a phone when you look at the device. With its narrow build, rounded edges, microSD card slot, back cover and small OLED display you will not be blamed thinking you are looking at some new mobile phone.

When you start using the Hotspot as a mass storage device, you will quickly come to appreciate the ease of swapping microSD cards on the side of the device.

The device also consists of a power and WPS button on the same side as the microSD card slot. Users will also have an external antenna port on the opposite side of the device.

You will also find a mini-USB port at the bottom of the device, which can be used for connecting it to a computer in order to charge the device or simply access the information contained on the microSD card.

The device also consists of an OLED screen, with which the user will interact the most with. The screen displays up to 5 bars of service and 4 bars of battery life. It will also announce the kind of service the user will have at any specific time.

Setting up the device is a painless affair, where the users simply pull away the back cover. Here you simply remove the battery and jot down the password, which is printed on a label underneath. You can then simply enter the password when you find the Hotspot in your list of wireless networks, and that is that!

During some testing conducted, we agreed with T-Mobile. During the testing period we constantly saw the 4G indicator, instead of the 3G, although the speeds varied wildly.

Moving away from city centers and to the outskirts, reception dropped and connection speeds slowed down to an average of 2Mbps for downloading and around 1.2Mbps for uploading. This happened, despite the fact that the device displayed 4G reception all the time.

According to T-Mobile, the device can withstand around 4 hours of continuous use. After we tested the device for around two hours and 45 minutes, we were down to two bars of battery life. We then left the device uncharged over-night and the device had one bar left.

The Hotspot will cost the user less upfront when committing to a two-year contract. With this contract, the device will cost around $80. The cost of a data plan with T-Mobile will also vary depending on the data plan a user chooses, along with a voice plan.

Both plans will allow users to connect up to 5 devices wirelessly at any one time, with USB tethering options for tablets.

The device can also be purchased off-contract at a price of $130.

Our conclusion is that the 4G hotspot is not as fast as a true 4G device. If you are wondering whether you will get service, we can assure you that will get it most of the times. The type of service cannot be guaranteed, however.

One word of advice before jumping for your 4G Hotspot – be sure to take a good look at T-Mobile’s data coverage map!