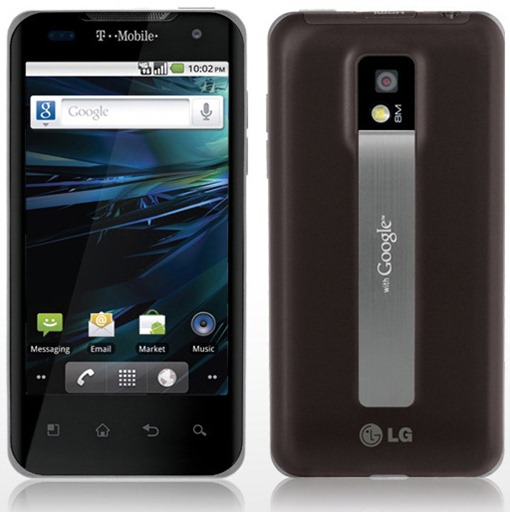 The T-Mobile G2x is said to be T-Mobile’s new flagship product, but many may look at the device with skepticism given its Tegra 2 pedigree. Having had the opportunity to test the device we were totally surprised with the new G2x, and here is why:

Looking at the hardware of the G2x and the Optimus 2X, there are not many differences other than the T-mobile logo replacing the LG branding just below the device’s earpiece. The device comes with elegant design and superb built quality as the Optimus 2X. The device consists of a glass panel with elegant beveled sides, which covers the entire front of the phone and conceals a 4-inch WVGA capacitive touchscreen, a 1.3 megapixel front-facing camera, an earpiece, proximity light sensors and the four standard Android keys.

The handset is an experience when holding it, mainly due to the matte soft-touch finish and curved edges of the battery door, which takes up the entire back space of the device. A strip of brushed aluminum displaying a machined “With Google” logo runs down the length of the back of the device. This is inline with a camera pod, which hosts an 8 megapixel sensor and a large autofocus lens behind a glass window. One cannot miss the single LED flash along with it.

Between the front glass and battery cover, one will find a silver rim that traces the entire perimeter of the device. 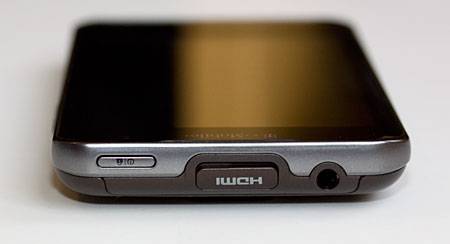 At the bottom the device consists of two small meshed openings on each side of the micro-USB connector, on concealing the mono speaker and the other casing the microphone. 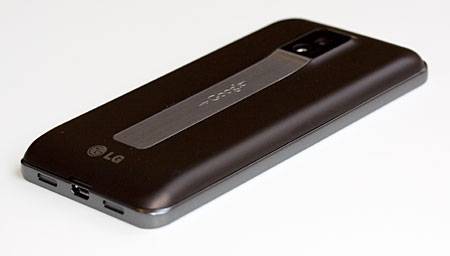 The user will find a simple volume rocker to the right of the device and absolutely nothing to the left.

The SIM and microSD card slots are located behind the battery door, along with a standard issue 1500mAH battery.

The device is shipped without any microSD card, mainly due to the fact that it consists of 8GB internal storage.

The 4-inch WFGA (800×480) IPS display panel definitely lacks when compared to its competition. Unfortunately the LCD washes out more than expected in sunlight and suffers from a significant amount of backlight leaking out from the edges of the screen of the device. Users are in a position to view visible ‘stains’ on solid, dark-colored content on the screen.

The device is powered by Nvidia’s 1GHz dual-core Tegra 2 SoC, which is accompanies by 512MB RAM and 8GB built-in flash storage. The device is also capable of handling 1080p video recording and playback. It also boasts with 802.11b/g/n WiFi, Bluetooth 2.1 + EDR, quadband EDGE and quadband HSPA+.

The device’s reception was tested on T-Mobile’s network and passed with flying colors. The sound quality is near perfect, but audio output is a bit quieter at maximum volume compared with other devices. The battery life is acceptable, offering users a day of moderate use.

The camera inside the G2x is fantastic to say the least. It takes wonderful images. We felt, in many instances, as if the software may have slowed down the performance of the device’s camera both in terms of processing and usage.

When opening the camera, you will notice a large lens opening, which allows for more light to be gathered. This is often an indication of a good quality camera.

The camera also consists of an 8 megapixel sensor and features a bright single LED flash. It, however, lacks a dedicated two-stage camera button.
The camera smoothly captures 1080p video at 24fps. Users will find that the camera, despite running on Android, uses a custom app by LG, which adds a number of useful controls to the device, such as smile recognition, panorama mode and scene modes.

The G2x runs on Froyo. The only problem with this is the fact that it now is Gingerbread time. Despite this, users will have a great experience using the phone. The device also comes with EA’s NSF Shift, Gameloft’s Nova demo, Polaris Office, T-Mobile TV, Tegra Zone, TeleNav, Qik Video Chat and Zinio Reader. T-Mobile also threw in the Swype keyboard, WiFi calling and SmartShare apps.

The G2x is a fantastic device. It is not perfect in all aspects, and do lack some functionality in some aspects. A fact is that the device is definitely T-Mobile’s flagship for now. The device is easy to use, perform fast, makes available a great camera and offers a great user experience, despite its Tegra 2 pedigree. The G2x is one of the better Android devices available on the market and is a definite have-to-have device for those looking to acquire their next Android smartphone.