Trending
You are at:Home»Smartphone Reviews»LG Optimus 2x vs Motorola Droid X2 vs Galaxy S2 – which one is the best high end Android device?
By Gadgetman on May 27, 2011 · Smartphone Reviews 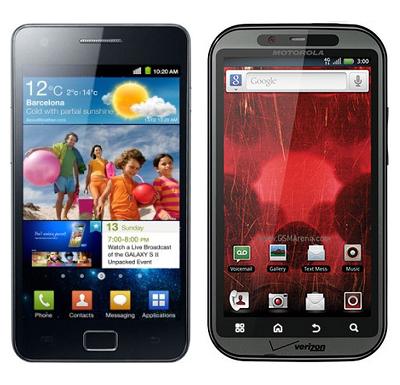 The latest line of big screen Android smartphones in the high end market has a surprisingly low number of competitors – you can literally count them on your fingers, with the most distinguishing devices being LG’s Optimus 2X (aka T-Mobile G2X), the Android developers’ new love interest, the strict industrial looking Droid X2 from Motorola and of course, the king-sized and -specced Samsung Galaxy S2.

The exterior
I have to say that all three smartphones looks pretty darn good on the outside – there’s little to be picky about, and it’s hard to choose between them based on the exterior alone – everybody has their taste. The Optimus 2X looks sleek with the 4 inch IPS touch screen (800×480 resolution) and 4 buttons below it, with the only gripe being the slightly large space left below the navigation buttons – but that’s actually good in use, as you can hold the phone better without touching the sensitive buttons and messing something up.

The Droid X2 looks awesome, as well, with its strict form factor and squared corners. It’s pretty much like the old Droid X, which is great. Motorola also solves the touchy buttons issue by using 4 hardware buttons for navigation – a better decision in my opinion. The display is 4.3 inches and the picture looks gorgeous with the 960×540 pixels qHD resolution – a noteworthy upgrade from the first model.

Samsung’s Galaxy S2 is practically a perfect slab smartphone – it’s sleek, slim, feels solid and has a big and beautiful 4.3 inch display on the front that uses the new Super AMOLED Plus technology for the best picture you’ve ever seen – the colors are simply amazing, you have to see it to believe it. The resolution is the good old 480×800, but it’s still more than enough for any apps. 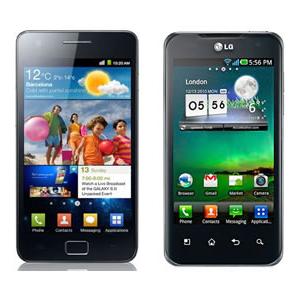 All three smartphones have impressive performance, thanks to their new dual core platforms. The 2X uses NVidia’s Tegra 2 solution, which is very fast and can go through any app or game without a hitch. The RAM is limited to 512 MB DDR2, though, which might affect the overall performance when running multiple apps at once (though Android should handle that pretty well itself).

Motorola has decided to use that platform as well, which is a bit strange considering that they always used Texas Instruments chips and the OMAP 4 dual core is actually faster and more power efficient. Regardless, the performance of the Droid X2 should be equal to the Optimus in most aspects. The RAM amount is also 512 MB, like on the LG – well, if they think it’s enough, it must be.

Samsung’s Galaxy S2 stands separate, however, because it’s the fastest of the trio thanks to the new Orion platform that has a dual core processor running at 1.2 GHz out of the box and a new video graphics solution, which is faster than the old champion PowerVR SGX540 as well as NVidia’s GeForce adapter. Samsung also used 1024 MB of RAM – more than enough for any apps and enough to make the Galaxy S2 faster in multitasking by quite a margin.

Storage space is pretty much equal on all three devices: the G2X has 8 GB of built in memory and a micro SD card slot for an additional 32 GB. Motorola did the same for the Droid X2, while the Galaxy S2 is a bit different by having 32 GB of built in memory and no external card slot – you get 8 GB less of potential total memory, but you also get 32 GB from the get-go, as opposed to having to buy a micro SD card.

Other specs are also very similar – all three smartphones have support for Wifi N, Bluetooth 3.0, gyroscope, GPS, accelerometer and others. The Galaxy S2 also supports new 21 Mbit+ HSPA networks, but seriously, isn’t 14.4 Mbit/s enough for a smartphone (not that you can achieve those speeds outside of any major city).

The cameras are pretty much equal – all support HD video recording, with the highest quality award going to the Galaxy S2, followed by the Droid X2 and the Optimus 2X – the latter could definitely use more sharpness in both videos and photos.

Strangely enough, only the Galaxy S2 runs Android 2.3 out of the box, even though it’s been available for quite some time now. The other two devices run on the good old 2.2 Froyo, but will have an upgrade available within the next few months, so I suppose that is good enough. The only thing affected because of this is the performance – thanks to new improvements in 2.3 Gingerbread, it can use two cores more efficiently, though most people won’t notice a difference in everyday tasks.

LG seems to be doing everything to please developers, as well – it has released the source codes for the G2X and Optimus 2X, and installing custom ROMs and software is easier than ever – no wonder it has become the new favorite device for tinkering (if Cyanogen got one – it must be good 🙂 ). The situation is less clear with the Galaxy S2 – many believe it should be possible to install custom ROMs on it, though the scarce availability of the phone stops people from trying to find out (and potentially bricking it). Motorola, on the other hand, takes the side of Sarkozy 🙂 and ships the Droid X2 with a locked boot loader – a shame, really, as it’s a pretty great device in every other aspect. Regardless, most people won’t notice a big difference between the phones software-wise.

The G2X and Droid X2 are already shipping through networks and are priced at $199 with a contract and $450-550 without one. The Galaxy S2, sadly, can only be bought in Korea at the moment, and will be released worldwide in the third quarter of 2011. It can still be bought unlocked online, but at double the price – it usually goes for $800+, and the specs are definitely not enough to make me pay twice the price, though if you want exclusivity and the most stylish smartphone to date (IMO), it’s definitely a good choice.

The Optimus 2X/Droid X2/Galaxy S2 trio will dominate the market in the first half of 2011, even though the latter is not as widely available. If you want the best performance for the price or you are a developer, the G2X is your best bet (it also works on most worldwide 3G networks), if you need something more unique-looking at a great price and you’re not a developer, the Droid X2 is an excellent choice, and finally, if you want something more unique and exotic-looking that can also outperform any other smartphone, there’s nothing better than the Galaxy S2.