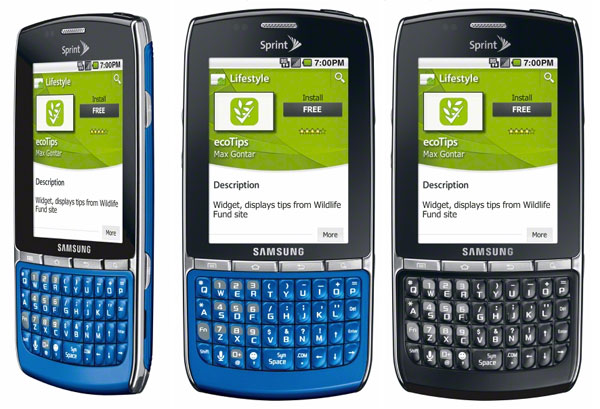 Among all the newfangled technology in the mobile world, dual core processors, big displays bearing the Super and Plus monikers and dozens of GB of memory, everyone kind of seem to have forgotten about the “green” movement that just a few years ago was all the rage – all the prototypes of green, recyclable and bio degradable phones, laptops and other equipment have never materialized.

But in its relentless pursuit of new markets, Samsung has remembered about eco-friendly products, and has been promising to deliver something in this niche for over a year now. And finally, it’s here, one of the few eco-friendly smartphones in the world, the Samsung Replenish, which will hopefully be bought by enough customers to make a difference.

The Replenish looks pretty simple, though unusual for an Android phone: it’s a step right into Blackberry territory, with a small screen on the front and a portrait QWERTY keyboard for fast typing. The 4 Android navigation hardware buttons are located right between the keyboard and the screen, which looks a bit awkward, and may cause you to accidentally press them when typing, especially if your fingers are fat. Overall, the design looks like something ROM would build, and the quality of the materials and construction is actually pretty good.

The display is definitely not the highlight of the Samsung Replenish – it’s a small 2.8 inch capacitive touch screen, which is pretty responsive, but at its 240×320 pixels resolution, it frankly doesn’t look that good. Still, Android works well, and you can even surf the Web, though it’s definitely a limiting factor.

It’s too bad that the resolution and size of the display are so small – processing power-wise, the Replenish is actually pretty decent. The phone uses Qualcomm’s relatively old MSM7627 processor, running at 600 MHz. This is the same one used in the HTC Legend, and it’s NOT similar to the MSM7201A used in the HTC Magic, G1 and Tytn 2. A lot of people have that misconception, but the MSM7627 actually has a FPU and dedicated video adapter on the chip, the Adreno 200, the same one used in the first generation Snapdragon, so in many ways, it’s like a cut-down version of the Snapdragon.

Web pages load fast enough, and you can even play some 3D games (Angry Birds works flawlessly) and watch full-sized DivX movies (video acceleration is also working well) – not that you’re going to enjoy all that on the small QVGA display.

The processor is coupled with 512 MB of RAM (384 of which are available to the user) – more than enough for anything this phone will be used for, and there are 512 MB of onboard memory for all your apps. Additional storage space can be added via a micro SD card (up to 32 GB supported – standard fare).

The Replenish actually has all of the usual features you’d find in a modern smartphone: there’s support for Wifi b/g, Bluetooth 2.1 EDR, assisted GPS, accelerometer, a small 2 megapixels camera, and more.

The battery is a pretty big 1600 mAh unit, which should last a full day of moderate work – great news for those who will actually be using it for day to day work. A big selling point of the Replenish is its optional solar panel back cover, which charges the battery and provides 20 minutes of talk time for every 1 hour it sits in the sun – that could prove invaluable if you’re working in the field, away from power lines and need to always be able to call or send messages.

Android2.2 powers the software part of the Replenish, and it’s good enough for any tasks you may want to accomplish. The usability is sort of bogged down by Samsung’s custom user interface, but if you can remove it, Android should provide a fast and painless experience.

The Samsung Replenish is a good choice for those who want to buy a cheap phone that can do most of the things smartphones do at a fraction of the price (the phone will cost $50 from Sprint and it waives $10 off the monthly fee, as well). It being eco-friendly is thanks to the fact that it’s 80% built out of recyclable materials, and kudos go to Samsung for that, but I don’t really see people recycling the device. The solar charger on the back and decent processor should make it an excellent choice for those who work in the field – if anything, it can make a great music player and email terminal.