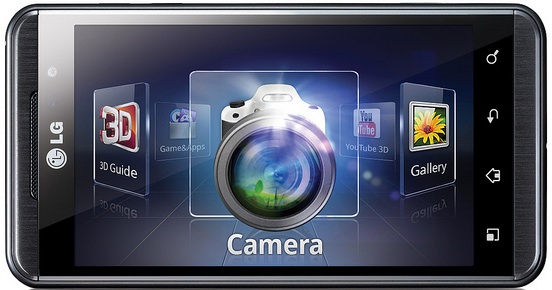 It’s been a pretty short while since the MWC 2011 ended, and there were a lot of device demonstrated there that will define this year. One of the most popular technologies is glasses-free 3D, and there are already a couple of smart phones announced and ready for release that use it. The LG Optimus 3D is the best among them, both in the quality of the 3D display area and in processing power. Just recently, AT&T has announced that they will be offering the model to their customers, and it will be known as the Thrill 4G (there are no other differences aside from the name).

Nothing different on the outside

On the outside, the new Thrill 4G doesn’t look that much different from any other slab smartphones with big displays like the HTC Thunderbolt, Samsung Galaxy S2, HTC Inspire and others. It’s got a pretty nice housing made of quality materials (plastic and magnesium) with rounded edges and the usual 4 navigation buttons below the screen (with the notable absence of a touchpad, which is a shame, as it can be pretty useful in games and text editing, for example). The first thing that suggests this phone is not everything it seems to be is the dual camera array on the back – two 5 megapixels cameras with LED flash allow the user to take photos and shoot 1080p videos in both 2D and 3D (there’s also a VGA unit on the front for video calls).

Everything changes when you start using it

The 4.3 inch display has a resolution of 480×800, which is a great choice, though they could’ve gone with a newer qHD panel. However LG more than makes up for it with the excellent 3D picture quality – for such a small screen, the 3D effects are definitely noticeable and make a difference in movies and games. LG uses its own IPS-LCD technology for the screen, and the viewing angles and 16 million colors are simply great. Not only that, but the 3D technology ( a parallax barrier over the display) can not only be turned on and off, but also adjusted for the optimal settings for your eyes and the distance you’re usually using your phone at.

As with the HTC Evo 3D, the 3D technologies in the LG Thrill 4G do not affect the hardware inside the device – as a matter of fact, this phone is the fastest dual core model on the market! It uses an all-new dual core TI OMAP processor, which is faster than the Tegra 2 at the same 1 GHz frequency (TI OMAP processors always seem to be very well optimized), and the integrated PowerVR SGX 540 now runs at 300 MHz, providing more than enough performance in games and video playback – it’s also faster in benchmarks than the GeForce in the Tegra 2.

There are only 512 MB of DDR2 RAM in the phone, which seems a bit low, but at least it’s the fastest memory on any smartphone, thanks to the dual-channel memory controller inside the OMAP. With all this performance, the whole solution consumes even less power than the Tegra 2, so the 1500 mAh battery can easily last through a day of moderate use (though the 3D technology does take its toll). It’s pretty funny – while NVidia was overhyping their Tegra 2, Texas Instruments in their usual secretive fashion created something better and faster without much fanfare.

The phone is only 12 mm thick and will run Android 2.2 when it finally comes out this summer, with an update to 2.3 possible (and actually very desirable!) in the future. No info on the pricing, but if it costs less than $250 with a contract, it will definitely be a great option for anyone who wants a smartphone that can do everything.