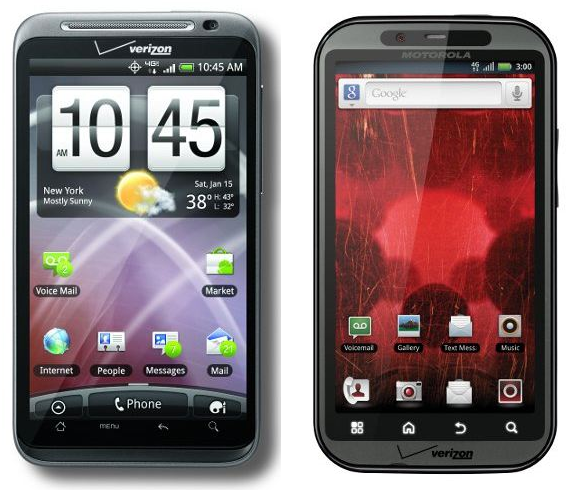 With both NVidia and Samsung announcing that their dual core processors are ready for mass production, a lot of companies had to fulfill pretty high expectations from consumers and power users alike in 2011. And for the most part, they did.

LG and Motorola were the first to announce their first dual core CPU smartphones, while HTC, which typically sticks to Qualcomm processors, had to settle for a less powerful handset for their first release, the HTC Thunderbolt, Verizon’s first 4G LTE enabled device.

Motorola has a direct competitor to this smartphone, the Droid Bionic, which is basically a simpler and cheaper version of the Atrix with less RAM and no secondary OS, but it’s still powered by the Tegra 2 platform, so it really seems like HTC’s first comer is at a disadvantage. But is it really so?

If you compare these two phones, the first thing you’ll look at is the exterior, and both of them look very nice. The Thunderbolt is like an evolution of the Evo 3G, with better materials and a more ergonomically correct placement of the components – HTC really perfected this big screen design. The Motorola, on the other hand, uses a new (for the company) design with rounded edges and a polished and clean overall look, which reminds more of the Defy than of the other Droids. Both phones look very similar, though, and it’s a matter of taste which one you choose based on the outside.

But if you want to buy one of these smartphones to have it as your everyday phone, it is the internal components that count, and the decision is not so simple here, either. At a first look, the Droid Bionic seems to win, with its dual core CPU, powerful video graphics adapter, 16 GB of internal storage space and very nice qHD (960×540 pixels, Quarter HD) 4.3 inch display. Compared to that, the 1 GHz single core CPU, 8 GB of internal memory and 800×480 pixels 4.3 inch screen of the Thunderbolt seem a bit outdated.

However, things aren’t so simple (are they ever?), and the 1 GHz Qualcomm Snapdragon has the same or better performance in most benchmarks than the dual core. This is most likely because of the bad support for multiple cores in Android 2.2 and 2.3, and it’s likely to change with future versions, but the Droid Bionic will most probably never see the update (knowing Motorola, they’ll just release a new model).

Moreover, the Thunderbolt has 768 MB of RAM, as opposed to the 512 in the Bionic, which will definitely mean better performance when running multiple apps or resource intensive tasks like watching a video on Youtube using Firefox Mobile. The only area where the Droid’s Tegra 2 clearly wins is gaming, as the GeForce adapter is simply the best on the market, being twice as fast as the new Adreno in the Thunderbolt (most games should work fine on both devices, though).

Other hardware specs are about the same on both devices: they both support Verizon’s 4G LTE, have 8 megapixels cameras with flash and HD video support, Wifi N, Bluetooth 2.1, accelerometer, magnetometer and other sensors, and more. The only other obvious difference is the amount of memory: there are 16 GB in the Bionic and 8 GB in the Thunderbolt, but HTC is including a 32 GB microSD card in the box, so you have 40 GB from the start, while it is unknown whether Motorola will be shipping any card at all (the Droid has a microSD slot, but it seems like Motorola and Verizon think that 16 GB is more than enough).

Other considerations and the conclusion

Software-wise, everything looks solid on both smartphones, but you’ll have to choose between the MotoBlur and HTC’s Sense, whichever you like more. If you’re a developer or power user, you’ll definitely want the HTC, as it can be unlocked for custom ROMs (Motorola is known for locking down all their phones).

In the end, I’d say that the two devices are pretty much equal, and if you’re debating to choose between them, you should go with the one that is cheaper or has more options in the plan. The Thunderbolt is an excellent choice, and it’s doubtful that you’ll be able to take advantage of the dual core power on the Motorola without the latest Android OS (which may never come from the company).

However, if you don’t care about the ability to flash custom ROMs and tinker with the device, and would like to have the maximum amount of memory (48 GB on the Droid with a microSD card) in the future, the Bionic could be a better choice – it’s really up to you.