Motorola has been trying hard to get into the enterprise smartphones market for quite some time now, especially after the success of the first Droid, which practically brought the company’s mobile division back to being profitable (or at least not being in the red). 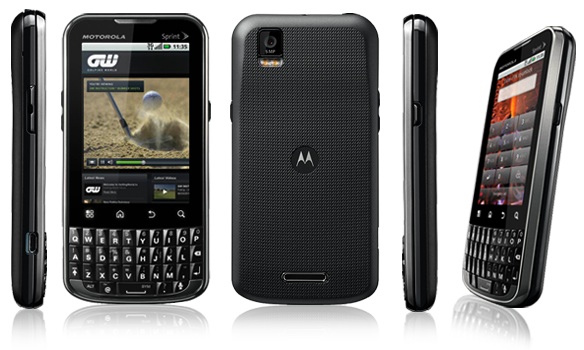 And one of their latest devices can actually succeed at it – the Motorola Droid Pro seems to have everything a business user may need, including on-device full encryption and both GSM and CDMA radios, which allows it to work on practically any network in the world.

This phone has now been released on Sprint, which definitely lacked in this area up until now (though this year, they just keep surprising everyone with their rich offers in smartphones). The Sprint version is called the Motorola XPRT, and it has everything a corporate or small business client may need.

Great Blackberry competitor and powerful internals
The Motorola XPRT looks pretty good on the outside – it has a very business-y feel to it, and reminds you a lot of the various Blackberry phones, both with its style and of course, the portrait QWERTY keyboard under the display. The keyboard is very nice to the touch, and it’s very comfortable in use – it’s just as good as the one on the Blackberry Bold, possibly even better thanks to the 3.1 inch touch screen with HVGA resolution, which is more than enough for any tasks, from Web surfing to document editing and Skype conferencing.

The internal hardware is also up to the task – the XPRT is pretty powerful for a business smartphone, usually similar Blackberries are nothing more than glorified cellphones with access to the Internet. The XPRT has a 1 GHz TI OMAP 3620 processor, which is faster than a similar second generation Snapdragon and also consumes less power. The CPU is aided by 512 MB of RAM, which will be enough for anything you may need (even dual core phones run very fast with 512 MB).

A micro SD card for memory and a massive battery
There’s also 3 GB of total inbuilt memory space, though you can upgrade that to 32 GB (and more!) with a micro SD card that sits underneath the cover (it’s not designed to be easily removable). There’s a 5 megapixels camera on the back for those who want to take photos and videos and by the looks of it, it’s the same one that was used on Motorola Droid – a great camera that also supports widescreen video shooting, although only in 720×480 resolution. The battery on the XPRT is impressive – it’s a massive 1860 mAh unit, which should easily last a full day of heavy work.

Sure enough, you get everything else you’d expect on a smartphone: Wifi N, Bluetooth, DLNA, a 3.5 mm audio jack, accelerometer and magnetometer sensors – everything is present and accounted for. One of the special features of the XPRT is its ability to work on both GSM and CDMA networks, so you can use it anywhere in the world – that’s definitely a great feature to have for those who travel or those who work in remote locations – you’ll get more coverage from all the networks around.

MotoBlur is there to “spice” things up
The phone runs Android 2.2, not 2.3, as you would expect, but hopefully there will be an upgrade in the future. Still, even Froyo is more than enough for most apps that are currently on the market, and you sure won’t have any problems running them. Motorola also used their MotoBlur skin, for which I have only one question: Why? It certainly won’t help business users, especially when it starts lagging and crashing. If you don’t like it or want a stable interface and OS, you should keep that in mind.

The XPRT is a great business phone on Sprint’s network, and at $129 with a contract, it’s very cheap, as well – definitely a great choice for any corporate or professional user that needs a secure, reliable device that will pull through any work.