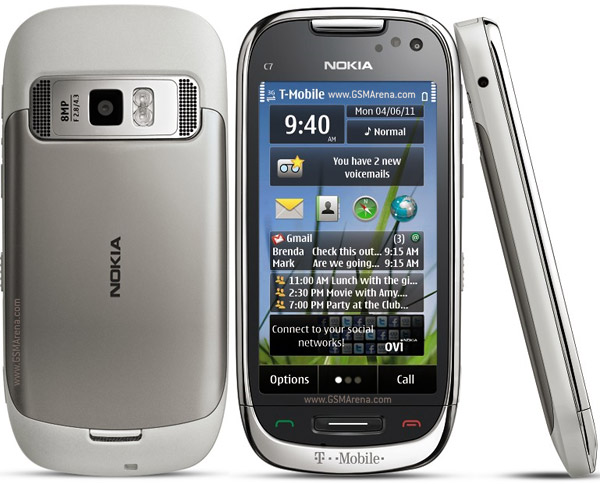 Even though the Symbian OS is officially on the death bed, with Nokia choosing Windows Phone 7 (guess my dream Nokia Android phone will never come true 🙂 for their future smartphones, there still is a generation of Symbian S^3 devices that need to get sold, and T-Mobile US made the questionable call to actually acquire one for their customers. Maybe diversity is good, but choosing a phone which you know will never take off in the apps department and will be useless in a few years may not be the best choice (a Windows Phone 7 device would be much better!).

Either way, the decision has been made, and we need to take a look at the smartphone in question: the Nokia Astound. This phone is also known as the Nokia C7 in Europe, and it’s selling pretty well, despite its shortcomings. Beginner smartphone users are the number one buyer category for it, which is easy to understand, since the new Symbian OS is easy to use, stable and pretty darn fast, especially when there aren’t a lot of apps to load it up with. Sure enough, the price has been adjusted accordingly on both continents, although T-Mobile users will get the better deal at only $79 with a contract – pretty cheap for a full smartphone!

The Astound looks nice on the outside, having a clean, pebble-like housing with smooth surfaces and rounded corners, and it has everything a new smartphone user may need. The overall size and weight is pretty small for a smartphone these days at 117.3×56.8×10.5 mm and 130 grams, and the shape definitely makes it look smaller than it is (plus it sits well in your hand).

The display is a nice 3.5 inch 640×360 AMOLED unit covered with Gorilla glass for the best scratch-resistance, and while it falls short of the standard 800×480 resolution on most Android devices, but is surprisingly good for everything from games to Web browsing (then again, 480×320 was good enough for the iPhone 3G and 3GS, and even now people aren’t complaining). On the back, you’ll find a very nice 8 megapixels camera with dual LED Flash and support for 720p recording, which is pretty unusual for an entry-middle level smartphone and a nice surprise for the buyers.

The Astound uses Nokia’s custom solution for the internal hardware, which has worked well since the times of the E90 communicator: there’s a low power ARM11 processor running at 680 MHz coupled with a dedicated Broadcom graphics chip, providing enough power for almost any tasks. The 256 MB of RAM are low by today’s standards, but Symbian uses much less memory than Android or iOS, and this amount will definitely be enough. The other hardware specs are also pretty standard: there’s support for Wifi, Bluetooth, a proximity sensor, accelerometer, USB port and more.

Great battery life, but the future of the OS is already sealed

Thanks to the non-demanding components, the battery on the Nokia Astound should last longer than just about any other smartphone on the market – 2-3 days is normal and much closer to what users switching from older cellphones might expect.

Overall, the Nokia Astound is a pretty well-made smartphone (as expected from Nokia), however the issues with the Symbian OS being simply left to die make it an undesirable choice for those who want to get the most out of their phones and expect it to be useful in 2 years or more. T-Mobile and Nokia seem to understand that, hence the lower than usual price for the nice specs (the C7/Astound was originally intended to be a middle-class Symbian S^3 device), which makes the Nokia Astound a perfect choice for those who are new to smartphones or are switching from older cellphones and don’t want to lose the good battery life on them.