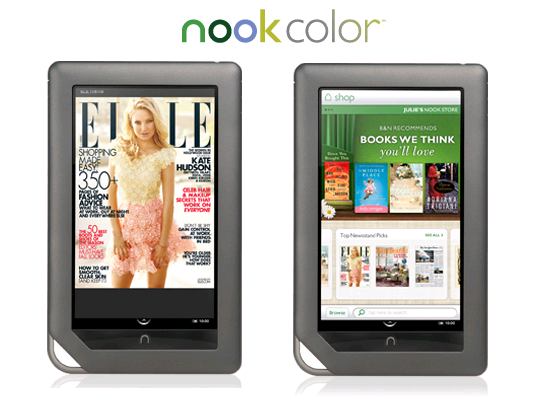 Barnes and Noble is the largest book retailer in the United States and the second largest online retailer, after Amazon. This company’s whole business is based on selling books, both in paper and digital formats. Lately, their profits have started falling considerably, though, and of course, the reason for that was the advent of online media and new digital technologies.

For one, Apple’s iPad and their own book store has definitely impacted book sales, mostly for people who were not familiar with tablets and smartphones up until recently. That’s what prompted Barnes and Noble to start looking at new and alternative ways of distributing their goods and maybe getting into new niches at the same time.

Enter the Nook Color – Barnes & Noble’s first e-reader/tablet, which is a pretty unique device in itself. For starters, it looks and works like a weird amalgamation of Apple’s iPad (or Samsung’s Galaxy Tab) and Amazon’s Kindle – it has a 7 inch, IPS-LCD color display with a nice 1024×600 resolution, as well as a very intuitive and easy to use interface that is geared towards reading eBooks and magazines.

The exterior looks pretty unusual – it’s different than most other tablets and e-readers on the market in that the build quality is very high. The back is made of a soft plastic, while the device is surrounded by a durable metal frame and the screen is sunk inside a plastic frame that protects it from scratches and gives it a more industrial look.

Barnes & Noble intended it to be mainly an e-reader, but one that would be able to do a lot of other things when the owner isn’t in the mood for reading books. It can read magazines, surf the web, view Youtube videos, play movies and music and much more. The secret to this seemingly too advanced functionality for an e-reader lies in the OS – you might be surprised, but underneath all the custom modifications, the Nook Color is running Android 2.2, which is able to do most of the things you may need to, including view Flash websites and use Air apps (something the iPad still can’t do!). The Nook Color has its own app store, but sadly, you aren’t able to install Android apps from the Android Market and run them as you would on a normal tablet (although there’s a way around that now).

The hardware specifications are pretty low-level for a tablet, but much more powerful than any other e-reader on the market – the Nook Color has an ARM Cortex A8 processor running at 800 MHz and 512 MB of RAM – I don’t know how that pairing came to be, as 512 MB of RAM is a huge amount of memory for this processor and more than it can handle, though it does help a lot when running multiple apps, which you won’t do since the device doesn’t really support that!

Now, the interface and custom B&N software is pretty impressive and very easy to use – this tablet is perfect for people who just want their reader to work without any fuss and messing with the settings. At about $250, the Nook Color is a real bargain for what you’re getting, and that actually made it very popular with the hackers and modders community – they’ve already figured out how to root, flash the ROM and overclock this device, giving you a full Android experience in a high quality body. If you don’t want to spend $300+ for a tablet, but are tech-savvy and want to get the best for your money, a flashed, rooted and overclocked Nook is a simply amazing choice. Of course, you get no camera or microphone, but you know that already. 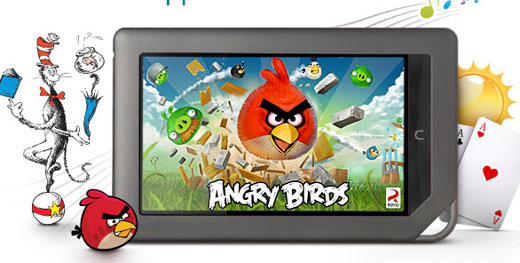 Needless to say, the Nook Color is perfect as an e-reader, as well – and you can use it for Web surfing, taking notes and other things, unlike other readers in this price range.