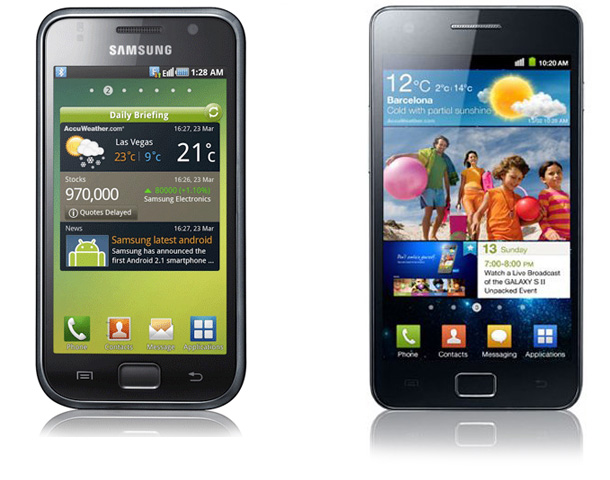 Samsung has definitely risen to a high level on the smartphone market ever since they released the Galaxy S, which is still one of the most powerful and functional smartphones in the world and can take on any other model with ease. But of course, time does not stay in one place for long, especially in the tech industry, and now Samsung has the successor in line, the Galaxy S2, ready to take the first model’s place as their flagship phone and kick any other phone to the curb.

The Galaxy S2 definitely looks, feels and works like a winner product, but is it so good that it’s worth upgrading from the Galaxy S you bought less than a year ago? That’s what this comparison will help you decide.

On the outside, you’ll find that both Galaxy S and S2 are very attractive, although markedly different from each other. The first Galaxy S has more rounded edges and a style that reminds of the iPhone, with a glossy back cover. The Galaxy S2 has a more unique design – it’s practically a perfected Galaxy S, with a more rectangle look, slightly less rounded edges, a very slim profile, a textured back cover and the same chrome accents on the front panel. I think the Galaxy S2 looks more moderns and stylish, though the Galaxy S can definitely hold its own in the design department.

Aside from the slightly updated exterior design, the biggest difference between the Galaxy S and S2 is in its internal hardware. From the screen to the processor, everything in the Galaxy S2 has been updated to match and outperform any other next generation smartphone, and Galaxy S2 does it like no one else.

The display on the new Galaxy is a super nice 4.3 inch Super AMOLED Plus that is visibly better than the older 4.0 inch AMOLED unit on the Galaxy S, which is almost unbelievable, especially when they have the same standard resolution of 480×800 pixels. The new subpixel technology really shows itself here, and the picture is crisp, clear, bright and colorful – you’re definitely not going to see something like it every day.

Performance wise, the Galaxy S2 is theoretically twice as powerful as the old Galaxy, thanks to Samsung’s own dual core Orion processor running at 1.2 GHz and featuring a new and improved graphics adapter, plus 1024 MB of fast DDR2 RAM. Compare that to the Galaxy S’ single core 1.2 GHz CPU and 512 MB of slightly slower RAM. However, it’s important to note that the Android OS, even in its latest version for smartphones 2.3 Gingerbread, can’t effectively use both cores – it does use them, but on very few occasions. That will change with Ice Cream Sandwich, though, so a dual core is more future proof, but for now, the performance is not that different.

Other hardware differences lie in the new NFC transceiver, an increased amount of storage memory (32 GB as opposed to 16 GB, in addition to the micro SD card slot) and of course, HDMI output in the Galaxy S2.

Software wise, there are few differences – the devices are pretty much identical, running Android 2.3 (though not all Galaxy S users got the update) with Samsung’s Touch Wiz UI and a slew of custom apps specific to the network of your choice.

The Galaxy S2 is definitely worth the upgrade, but only IF you have the money (right now, an unlocked Galaxy S2 costs twice as much as a new Galaxy S at about $850, so that’s quite a price) and need the extra performance. The Galaxy S is still a powerful smartphone, and can accomplish anything you need it to, so if you want to save money and get the most out of your investment, it’s better to keep it for another year or so, because something even better than the Galaxy S2 will be available by then.