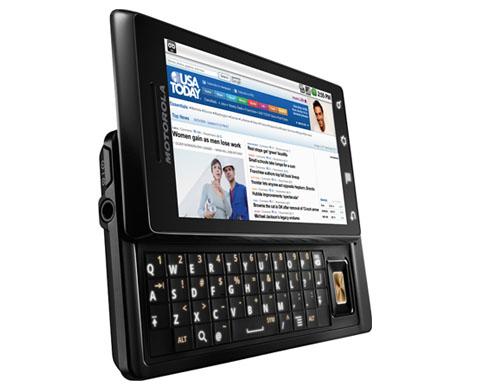 The Motorola Droid still remains the most well sold Android smartphone to date – it came at a very advantageous time, just when Android was gaining popularity at exponential rates, offering powerful hardware features never before seen on an Android phone, and it practically saved Motorola’s mobile division from selling out to another company because of the increasing debt and decreasing sales.

The successor to this great smartphone brought a few innovations, but it was nothing special – it didn’t sell nearly as well and because of the locked boot loader, it wasn’t even popular with the modding and developers communities. Lucky for Motorola, they also stumbled upon another lucrative market with the big screen Droid X, which also became a best seller and its unique design has a lot of fans and is still unmatched by pretty much any other phone (the Droid X2 thankfully continues the tradition).

And now it seems that it’s time for us to see the next phone in the QWERTY0-enabled Droid line – a few leaks have shown up online detailing the specs and listing the accessories for the upcoming Droid 3 from Motorola.

To start with, the new Droid 3 looks more like a perfected Droid than the Droid 2, and the designers got it right – the asymmetrical design of the first slider was more attractive than the second variant, giving it a more industrial and unique feel, while also making it easier to hold when opening. The Droid 3 has rounder corners, but that’s about the only change we can spot from the leaked photos and videos. The keyboard, however, has the same design as the one on the Droid 2, with an added 5th row for a numpads, which a lot of people will definitely love – a wise choice, indeed.

The screen has also been upgraded to a 4 inch unit with qHD resolution – it’s probably the same screen we’ve seen on the Atrix, which is fantastic news. Motorola also chose the most efficient and high performance platform for the Droid 3 – the new OMAP 4 dual core series from Texas Instruments, which is able to outperform the third generation Snapdragon at the same speeds both in general apps and games, while consuming less power. According to rumors, the Droid 3 only has 512 MB of RAM – I really hope that’s not the case, although the Optimus 2X, Droid Bionic and other smartphones have clearly shown that it’s easily possible to get the best performance out of the processor with just this amount (thanks to Android’s multitasking capabilities).

Pretty much the perfect QWERTY smartphone

Other specs include a 1500 mAh battery, which should last through a day (but barely) and the usual HDMI out port, separate in this case, like on the Atrix, which is a better setup in my opinion, because you can have the USB and HDMI ports occupied at the same time without another expensive adapter. An interesting detail is that the Droid 3 will lack supposedly 4G LTE (it will be coming to Verizon in the US, obviously), but I wouldn’t worry about it since those “4G” speeds are not much faster than 3G at the moment.

To sum it up, Motorola took the best from the first two phones in the ergonomics and design department and added more powerful internal hardware – creating yet another perfect Android phone, which I’m sure will be a best seller, especially when there are so few worthy competitors with a QWERTY keyboard. Unfortunately, not much else is known and all of the information is still unconfirmed, but we can be pretty sure that the upcoming phone will not disappoint.