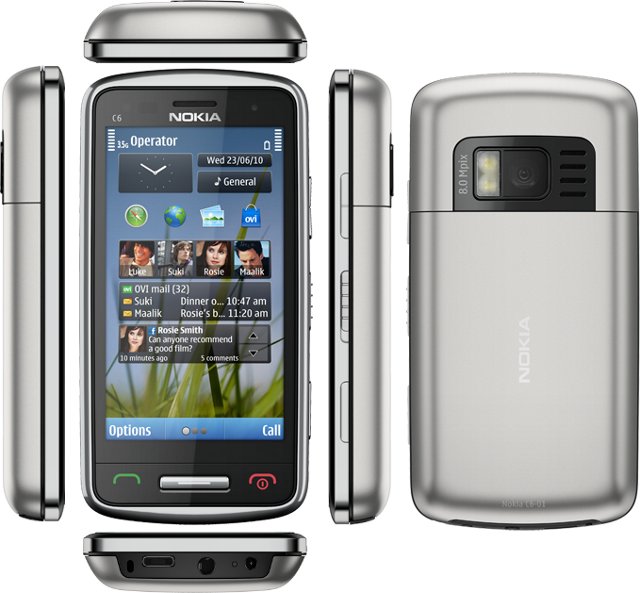 Nokia has always been known for producing high quality smartphones, although the software part leaves a lot to be desired. Despite their dwindling market share and the uncertainty over the future of Symbian S^3 operating system, the company still managed to release some of the best handsets on the market, especially to people who are new to smartphones.

The first Symbian^3 phones managed to impress a lot of people. The Nokia E7, with its QWERTY keyboard is a great continuation of the communicator line, while the keyboardless N8 is a perfect multimedia device that looks and works like a marvel. Even the middle range C7 can accomplish anything a smartphone user would want without issues, while looking good and being super durable.

But what about the lower end ranges, does Nokia pay the same amount of attention to quality on cheaper phones? Why, yes they do, and the latest demonstration of that is the Nokia C6-01, the latest entry to the Symbian S^3 scene. You should be careful not to confuse the C6-01 with the older C6, which runs Symbian S60v5 and is practically antiquated by now.

The Nokia C6-01 has an interesting design – it combines the friendly and simplistic look of your usual cellphone with the power of a smartphone in a relatively thick metal housing, which is very sturdy – it’s obvious that Nokia didn’t save on the quality of the materials. The phone sits well in your hand, and is very easy to use with one hand thanks to the 3.2 inch touch screen that has the usual S^3 resolution of 640×360 pixels and sports Nokia’s new Clear Black Display technology (also present on the upcoming Nokia N9), which basically deepens the black levels even more on the AMOLED panel, making the colors better than ever – this screen is very high quality for a low-end smartphone.

The performance is also on a high level, and it’s obviously because of the highly optimized software, rather than over-powered hardware. While other phones have moved to ARMv7 processors running at 1 GHz and more, Nokia still gets the most out of the old (and very cheap!) ARM11 architecture – the processor in this case runs at a “petty” 680 MHz, however in the best Nokia traditions it is accompanied by a dedicated graphics chip. Overall, the performance when going through menus and launching apps is the same as on the iPhone 4 or any Android phone, but of course, it suffers if you need to run some complex apps (for those you’ll be better off with an N9 – that’s what Nokia thinks). There are also 256 MB of RAM – more than enough for Symbian S^3, and 1 GB of onboard Flash storage space for all your apps. Anything else is stored on the micro SD card (a 2 GB card is included in the box, with 32 GB being the maximum supported capacity).

All of the features you’d expect, although the apps market is lacking

As is the case with any modern smartphone, the C6-01 supports Wifi, Bluetooth, HSPA+ networks (10 Mbps download and 2 Mbps upload), GPS, accelerometer and magnetometer sensors and more. The camera on the back will surprise you – it’s the same 8 megapixels unit as on the N8! Nokia is being generous here, as that one of the best cameras on smartphones, and having it on a low-end model is amazing. It can shoots high quality pictures and even film 720p videos, as well, so no functionality is cut.

With all of the good stuff that comes with the C6-01, there’s one huge drawback – the Symbian S^3 has officially been abandoned by Nokia! That means developers will have little incentives to keep making apps and releasing updates for them, and most likely, the apps base will never grow into anything remotely serious.

But if you’re the kind of person who’s satisfied with a few top apps on the phone and don’t need anything else, the phone is an excellent choice – it’s durable, reliable, it looks good and it works perfectly fine – it’s a Nokia!