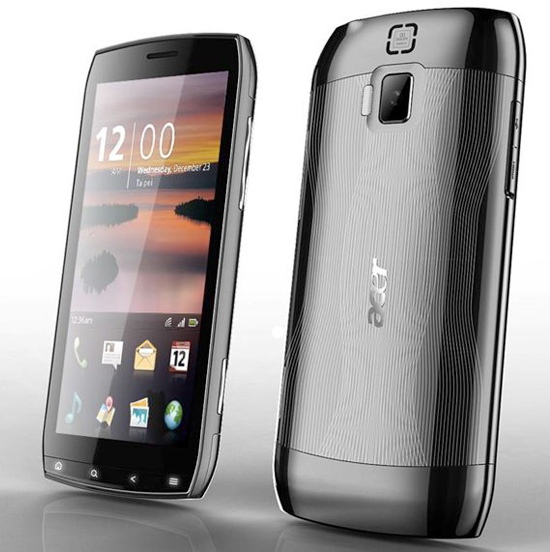 Dell’s unique 5 inch Streak smartphone has been on the market for a year now (it was released in August 2010), but the number of sales was definitely not what the company expected – it was even lower than most Windows 7 Phones, which practically means that few people have the need for an over sized phone that can’t fit any standard pockets.

Dell killed the device pretty silently, taking it out of production and off the market without much fanfare, with most reviewers and users agreeing that it was pretty much a failure. However, the concept itself appears to have stuck in another company’s collective minds, namely Acer, which decided to give the niche another go with a device that is strikingly similar to the Streak – the Iconia Smart.

Iconia is Acer’s brand name for everything mobile this year, and you might’ve already seen the tablets and laptops in the series on the market. The Smart is supposed to be a tablet/smartphone hybrid for those who don’t like the big size of tablets and the small displays of smartphones, but can it succeed where the Dell Streak failed?

Hardware specs wise, the new Iconia is really no different than the Streak, which is a year old, might I remind you. To begin with, it’s got a single core Qualcomm MSM8255 processor running at 1.1 GHz and 512 MB of RAM – not exactly cutting edge. The performance will certainly be enough for most tasks, however being a half tablet, half phone, you’d expect it to be able to do more, especially when all the usual smartphones can.

There are also 512 MB of ROM for the OS and all your favorite apps, as well as 8 GB of built in memory for all your files and media. Of course, the device has an external micro SD card slot that accepts cards of up to 32 GB in size, so you won’t have any problems upgrading the amount of storage space in the future. Other specs include the already omnipresent Wifi N, Bluetooth 2.1 EDR, DLNA, HDMI out, 3.5 mm audio jack, USB port, accelerometer, gyroscope and support for HSPA+ networks (speeds of up to 14.4 Mbps/5.76 Mbps download/upload).

The main difference between the Acer Iconia Smart and the Dell Streak lies the display and the cameras: while the Streak has a 5 inch screen with a 480×800 pixels resolution, a 5 megapixels camera on the back with only VGA video recording capabilities and a small 0.3 megapixels camera on the front for video calls, the Iconia Smart offers a better 4.8 inches wide screen with a whopping 1024×480 resolution (which is just 120 pixels short of the Galaxy Tab and other real tablets, for example), as well as an 8 megapixels camera on the back for great photos and HD video and a smaller 2 megapixels unit on the front that can also take pretty good pictures and video. The display on the Iconia is undoubtedly better, although the overall size of the device is pretty much the same.

The Acer Iconia Smart will be running the latest Android 2.3 Gingerbread when it comes out (as opposed to Dell using the outdated 1.6 version on a new device), and will most likely have an upgrade to Ice Cream Sandwich when it’s released. Of course, Acer couldn’t leave the interface alone, and they implemented a few changes of their own, the most notable of which is the new home screen and carousel widget, which looks and works pretty nice.

While the Iconia Smart does bring a few new things to the market, I don’t think it’s enough for it to succeed where the Dell Streak failed – after all, most people who need a tablet will want something bigger, while those who need a smartphone will not like the size of the device – it’s just too big for any normal pocket, and few will want to carry a special holster just for their phone. I guess we’ll have to wait and see.