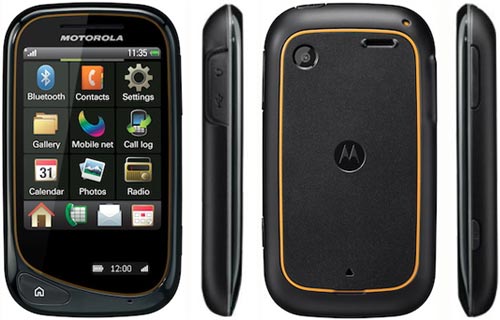 Motorola seems to have accidentally stumbled upon a great new niche for smartphone sales, namely rugged yet still normal-sized smartphones that can be used in everyday and even extreme situations without fear of them breaking at the first drop, and they’re set on getting the most out of it.

We’ve already seen the Defy, and now the next generation is here with the Defy+ and Titanium, the first one being a more general slab style smartphone, while the second is a business/specialty use device with an integrated iDEN radio. But both of them cost a relatively high price, so Motorola decided to release a model for the low end market – meet the Motorola Wilder.

The Wilder is very much like a lot of other low end phones, in that it’s compact, has a small screen, nothing impressive specs wise and costs very little. However, it has one big advantage: it can withstand much more abuse than any of its direct competitors and that, all other things being equal, definitely makes it more desirable for your average Joe.

The Wilder looks pretty normal at a first glance – it’s got a nice rounded form factor and it sits very well in your hand. On the front there’s a small 2.8 inch touch screen with a 240×320 pixels resolution, which is probably enough for most day to day apps, but barely enough for Web surfing, reading some long documents or watching a video on YouTube. An interesting feature is the second display below the main one – it’s a small 96×16 pixels monochromatic (white in this case) OLED unit that is used to display various quick information such as the battery level, cell tower signal, time, missed calls and other things you’d want to know at a glance without getting the phone out of stand-by. That’s an interesting decision and I can see how it can be useful for a lot of people. Right next to the OLED display is the home button… and that’s it for Android’s navigation. I use the back button a lot, but I suppose a virtual one could do fine for most people.

The other hardware specs are very basic: the Wilder is powered by a single core Qualcomm processor and a paltry 64 MB of RAM – I really hope that’s enough to at least open a browser window, and I wouldn’t hold my breath for running a media player along with it either. On the back there’s a 2 megapixels snapper that’s useful only for quick snapshots and very small video clips. Fortunately, the memory is provided by the user with a micro SD card – up to 32 GB cards are supported, but it’s not like you can store a huge collection of music for playback on this thing.

You’re not getting any basic connectivity for Internet use either: the only thing this phone has is a Bluetooth radio and EDGE support. There’s no 3G, no Wifi, no GPS, no accelerometer and other useful stuff that is standard on other phones. And this is where the initial impressions are shattered: how could Motorola do this in a so-called smartphone? Well, you need to see the price to understand the reasoning: the Wilder is only $100 without a contract, and will probably be a few dozen bucks with one.

But I’d much rather prefer it to have all the standard features even if it want a bit more expensive: the rugged housing and nice design are worth it. The phone runs Android, and is meant to be a first smartphone for people, but without even Wifi I doubt they’ll understand what a smartphone really is.
If you need a cheap and rugged phone that runs Android and can be used for calls and messaging, I guess the Wilder is a good choice, but if you use a 3G connection or Wifi at least from time to time, you’re better off looking for something else.