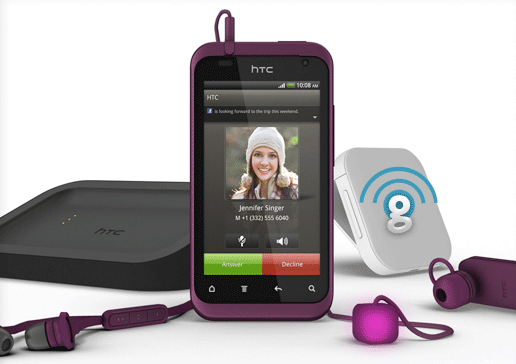 HTC can really create some good smartphones when they want, and one of their latest phones is now enjoying the reputation of one of the two best Android smartphones in the world – I’m talking about the HTC Sensation, of course (and the other phone is the Samsung Galaxy S2, obviously).

But the Sensation is a high end smartphone for those who need the absolute performance and don’t really care about the design (which is actually great – the phone not only looks attractive, but is also sturdy and practical for everyday use, unlike Samsung’s device). With that comes a major drawback – the phone is expensive – even with a contract, you’ll have to drop about $250 for it, which isn’t what most people expect to pay for a phone, even a smart one.

So HTC came out with another device that is similar to the Sensation, but costs less and looks more stylish – the HTC Rhyme. The new smartphone is aimed at people who want something that works well enough and looks great at the same time – more specifically, the plum colored version and the Charm accessory are marketed towards women and I suppose that it does look pretty nice – sort of a warm color that makes it look more than a phone, more like a fashion accessory. There’s another, more usual looking black version coming up, for those who like the phone but not the color (that includes women, as well: not everyone likes pink :-)). 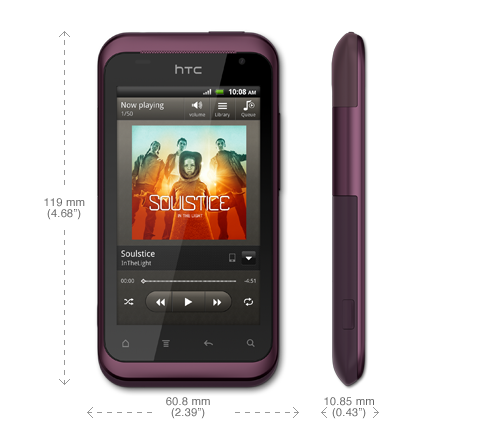 Overall, the Rhyme looks pretty nice on the outside: it’s nothing special (except for the color), but HTC did use a unibody aluminum body to make the phone as sturdy as possible – that should earn it points in the look and feel department. The 3.7 inch display on the front also looks great, with a resolution of 800×480 you can do anything you want, from browsing Web sites to playing games without any issues. Besides the screen, there’s a small 0.3 megapixels camera on the front, and on the back you’ll find a bigger 5 megapixels camera, which supports HD video recording.

The performance of the HTC Rhyme is brought to you by a single core Qualcomm Snapdragon and 768 MB of RAM, which do a great job at it and I don’t think there’s any app that will lag or slow down on this phone. All the other features that you might consider standard are also present, starting with the Wifi and Bluetooth adapters and ending with 4 GB of built in storage space and a micro SD card slot.

Software wise, there are a few surprises waiting for you, as well. Android 2.3 is the OS of the phone, however the new HTC Sense 3.5 makes it look completely different – the smooth 3D animations, different buttons placement on the screen (like the great dedicated shutter button in the camera app) and the widgets really improve the experience, making it easy to just power the phone on and start working – HTC have always been good with their custom Android skins, but this one takes the cake.

The phone also comes with a very good dock in the box, as well as the headphones and the Charm thingy. The dock looks very simple, and it’s also simple to use – just drop the phone in it and it’s on (it’s got integrated speakers that automatically connect to the phone, so it can double as a loud alarm and music player).

The price of the phone is $430 without a contract – with one, you’ll pay $199, but you can also get it for cheaper with a mail-in rebate or on Amazon Wireless for only $79 – a great deal for what you’re getting.