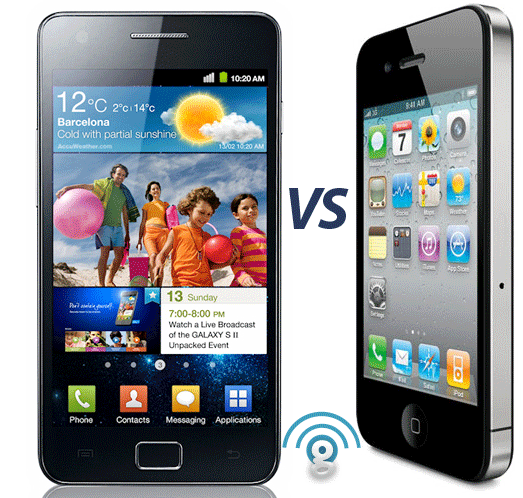 So, the iPhone 4S, the latest and greatest Apple phone is finally here… and it doesn’t really do most of the things that everyone has been expecting it to! Sure, it has a faster processor and a bigger camera, but overall things have not changed a bit – the software features can easily run on the older generations of the iPhone without problems, and Apple is actually going to disable the Siri app on all the iPhone 3and 4’s out there on October 15th, just because it is now a selling point of the iPhone 4S. Not cool at all, Apple.

Meanwhile, in the Android world, by far the most widely recognized flagship device is the Galaxy S2 from Samsung – it’s extremely fast, has a beautiful exterior and an amazing display, plus of course all the features you will ever need. If you’re interested in how these two devices stack up against each other, then read on!

First of all, I’m not saying that the iPhone 4S is a bad phone – it is actually a great phone, but it brings nothing really new to the table and the design remains unchanged from the iPhone 4. I’m sure many people will upgrade anyway, however a lot of them might just want to stick with the previous model until the iPhone 5 comes along (and it will, next year). The Galaxy S2 looks like no other Android phone before it – it’s stylish, super slim (8.5 mm, compared to the iPhone 4S’ 9.3 mm), has a display on the front and yet fits nicely in your hand and it can do almost anything you can think of, from big tasks to small.

Samsung’s own Exynos chipset that powers the Galaxy S2 (well, most versions at least) is faster than most other ARM Cortex clones out there, including Apple’s A5, although the graphics performance should be at the same level thanks to the new PowerVR SGX graphics adapter, which has two cores as well, and makes the iPhone 4S as fast as the Galaxy S2 in any games and 3D applications.

The Samsung Gamaxy S2 has a few of other things going on for it, including a full gigabyte of RAM, which allows it to run any kinds of intensive apps without problems, and run multiple apps and services at the same time without lagging or slowing down over time, like most phones do. There’s also the micro SD card slot, support for DLNA and support for HSPA+ speeds of up to 21 Mbps download (only 14.4 Mbps on the iPhone 4S). That may not be enough to sway an Apple fan’s decision, but it certainly shows that the company is just playing catch up to the current generation of phones with the iPhone 4S, and the situation is different than it was with the 3GS, which was faster and better than the competition when it was released, despite having the same design as the iPhone 3G.

Apple has already confirmed that the iPhone 5 will be coming next year (that’s right after announcing the iPhone 4S), but I think it would’ve been better for everyone if they released it now – it would’ve ascertained the position of Apple as a top manufacturer and made the competitors work harder at creating even more amazing phones. If you’re just getting a smartphone, or your contract is up, the new iPhone is not the only best choice anymore.

If you’re willing to accept a different OS, the Galaxy S2 can be a much better phone for the money – I know I work so much better on a 4 inch display than on a 3.5 inch – I don’t know why, it’s probably my minimum size, so switching from the iPhone 3G to a Droid and later G2X was the best thing I’ve ever done.