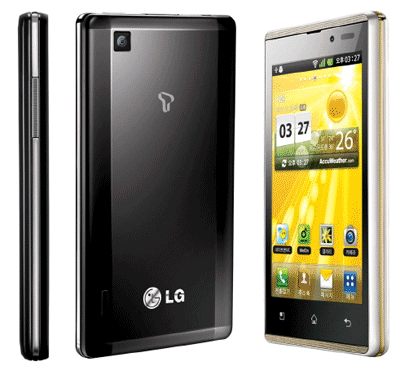 LG are definitely on the right track with their advance into the Android smartphones market. They launched with a bang – the Optimus 2X being the first smartphone with a dual core processor, and it’s still a pretty amazing device, but it’s quickly being overshadowed by the more advanced newcomers like the Galaxy S2 and HTC Sensation.

LG isn’t taking it lying down, either, they already have a new high end handset in the works, but until it’s announced and released in the West, it looks like it will undergo testing by the South Korean market, where the new Optimus EX is set to be released, and it looks pretty damn good.

The exterior of the new Optimus EX looks nothing like their previous models – LG must be trying out a whole new design, and it’s pretty good. It reminds me of all the smartphones you can see in Japan, with the same straight cut angular design, only with a bit more class to it: the corners are rounded, the back cover is tapered at the edges to give it a slimmer profile and make it feel better in your hand and overall, the thing looks pretty solid.

The performance of the new smartphone should be just slightly lower than that of all the other high end phones on the market, but not by much. The reason is that LG reused the good old Tegra 2 platform, but this time it’s running at 1.2 GHz and has a full gigabyte of RAM to back it up (compare that to the 1 GHz dual core and 512 MB of RAM on the Optimus 2X).

The display is the same size and same resolution as the one on the Optimus 2X, i.e. 4 inches and 800×480 pixels, however it is now made using LG’s own NOVA technology, which increases brightness and reduces consumption by up to 50% compared to normal LCDs. I don’t know if it’s better in image quality than the IPS LCD on the 2X, in fact it might be slightly worse since NOVA sounds a lot like PenTile to me, however the quality depends on the details (Samsung’s AMOLED, which also uses a PenTile matrix, is superb, while Motorola’s new energy efficient display looks like poo :-)).

There are of course, 2 cameras on the device: a front facing cam for video calls and an 8 megapixels unit on the back, which should take some great shots and HD video if it’s anything like the one on the Optimus 2X. Storage space shouldn’t be a problem, as the phone has 8 GB of internal memory and a slot for micro SD cards that can extend that by up to 32 GB (and 64 GB in the future). The usual Wifi, Bluetooth, GPS, DLNA, HDMI and other standard stuff is also present, no surprises there.

The LG Optimus 2X will launch in South Korea on SK Telecom at an unannounced price, and will be boasting Android 2.3.5 Gingerbread out of the box, with LG’s custom skin on top, of course (which is not bad at all, actually, and has a few unique features of its own that contribute to the experience). As for us westerners, we’ll just have to wait… wait and hope that when it comes to us, the Optimus EX will have a more powerful processor :-).