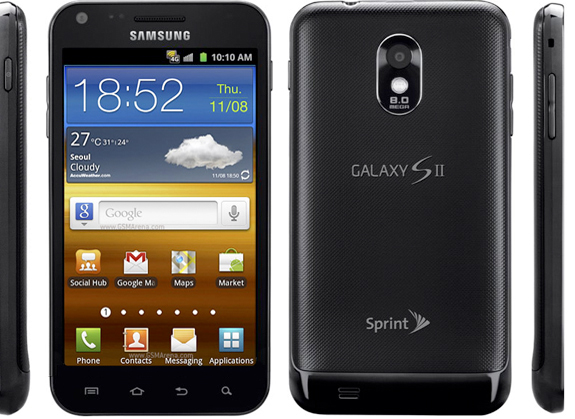 If I’d have to choose one word when describing the Samsung Galaxy S2, it would be “impressive”. This smartphone is practically the (current) pinnacle of evolution for Android smartphones, and heck, smartphones in general. The iPhone 4 looks like an old school rotary phone when put side by side with the Super AMOLED Plus equipped monster.

If you want proof that the S2 is popular, look no further than the overall number of sales: Samsung has sold over 5 million units in the first three months of availability – and to call it “available” would be a huge overstatement, as the thing wasn’t even released in the US, the largest consumer market – just imagine how that number will grow in the next few months!

And yes, the Galaxy S2 is already stated for release in the US, in several variations and on different networks. By far the most attractive offer is from Sprint, however – their new Samsung Epic 4G Touch is simply amazing, it’s like an improved S2, actually!

Let’s start with the exterior: it has been refined and looks slightly better than the generic GS2 – the 4 Android navigation buttons style definitely do the trick for me – I like them better than the standard trio, they seem more stylish and unusual on this design. The corners are also more rounded, reminding more of the first Galaxy S.

But the biggest change is the display: for reasons unknown Sprint ordered the Galaxy S2 with an oversized Super AMOLED Plus unit – it is now a whole 4.52 inches across, making it one of the biggest and most beautiful screens on the market – if nothing else, the Epic 4G Touch is worth checking out just for this beauty. At the same time, the overall size of the phone hasn’t changed by much, and it fits in your hand just as well as the original – it’s truly a win-win for everyone.

Another important detail is the processor: unlike T-Mobile’s version, the Epic 4G Touch features the ultra-powerful Exynos, whose two cores are running at 1.2 GHz and which seems to be beating just about anything out there in benchmarks of any kind – for example, Quadrant Standard shows over 3500 units on average out of the box. Obviously, all this power would be nothing without a decent amount of RAM, and the new Epic doesn’t disappoint – there’s a full gigabyte to help you run any apps you want, at the same time.

Finishing the round of improvements over the standard Galaxy S2 is the battery: Sprint’s new flagship sports a big 1800 mAh unit, which should increase the number of minutes (not hours, sadly) your phone stays on after unplugging it by about 20-30, if third party extended batteries are anything to judge by.

All of the other hardware specs remain intact, which is simply awesome: the phone has your usual support for Wifi, Bluetooth, DLNA, HDMI out via a shared USB port, 16 GB of internal storage space AND a micro SD card slot, a nice 8 megapixels quality camera on the back for all your photography needs and support for 1080p video recording, as well as a smaller 2 megapixels unit on the front for video calls and quick snapshots.

Out of the box, the Epic 4G Touch will be running Android 2.3.4 Gingerbread, i.e. the latest version, with Samsung’s also latest version of Touch Wiz, which despite all the negative press, is actually a good skin and has some unique features to offer as well – I really like the ability to add folders inside the app menu and the ability to use accelerometer gestures to do various things.

The price will be set accordingly, though – this is a very expensive phone, especially compared with the slightly less features, but still great competition. However, if you want the absolute best smartphone money can buy AND you like Sprint’s network, this is an excellent choice for a smartphone.