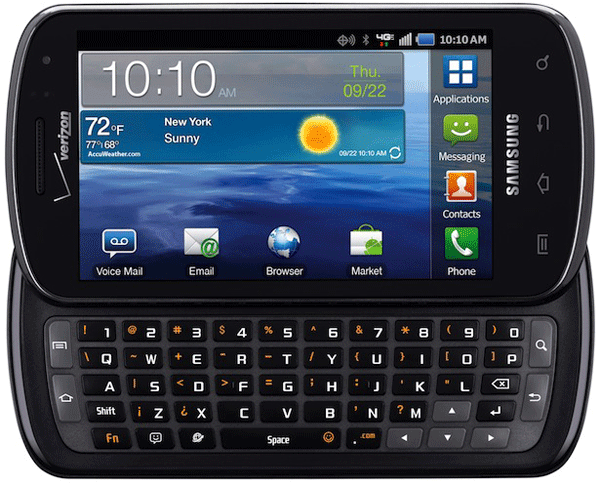 Verizon already has a pretty good collection of smartphones for sale, including the Droid Bionic and the newly announced Droid RAZR (which is available for pre-order), but they seem to lack in good smartphones with a QWERTY keyboard – the last one I can remember is the Droid 2 Global, which was a great phone overall, but the keyboard was a bit iffy.

Well, the network seems set on fixing that, as just recently they announced the Samsung Stratosphere – an affordable, 4G LTE capable smartphone with a very nice QWERTY keyboard hiding under the display. It may not be the most powerful device on campus, but it’s definitely worth the attention if you want a good hardware keyboard and fast data connection speeds – I’m also guessing the Stratosphere name comes from the latter feature instead of the processor speed.

On the outside, the Samsung Stratosphere looks very similar – you could even say identical – to the slightly older Samsung Epic 4G, which was released on Sprint’s network a couple of months ago. Indeed, the phone is based on the same Galaxy S platform and chassis, and with the exception of the radio and a few changes and improvements here and there, they ARE pretty much the same phone.

The 4 inch display is the same Super AMOLED, 800×480 pixels unit used on the Galaxy S, which means it’s one of the best looking displays out there – the colors, contrast, brightness are all great as always. You’ve got the 4 navigation buttons right below the screen, which are a bit too easy to touch when you’re holding your phone with one hand.

There’s nothing bad to be said about the build quality – the materials are fine, with the back cover having a soft touch (as opposed to the glossy plastic used on the Epic 4G) and the metal frame providing all the support the phone needs – there are no flexes or squeaks whatsoever. The QWERTY keyboard is also great, with the keys being big enough to be usable by anyone, and with them separated, you can type a lot faster with less mistakes than you would on the Droid 2, for example. 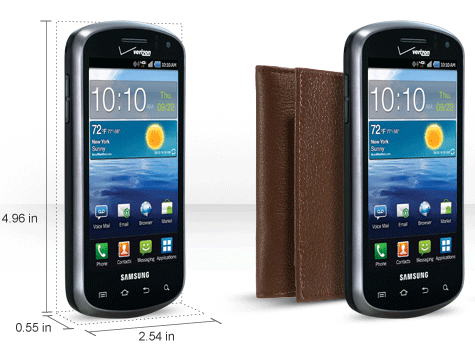 The hardware specs are pretty average for a modern smartphone, but they’re good enough to let you do almost anything you can think of on the phone, from document editing to Web browsing and of course, watching videos, listening to music and playing games. Aside from the aforementioned support for 4G LTE, the Stratosphere has a Wifi N and Bluetooth 2.1 EDR adapters, GPS, DLNA, light and proximity sensors, an accelerometer and magnetometer, as well as a 5 megapixels camera for taking photos and HD video and a 1.3 megapixels unit on the front for video calls and quick snap shots.

The performance is provided by a 1 GHz processor that is aided by 512 MB of RAM – that’s pretty much the bare minimum for comfortable work nowadays, although there are lower end handsets with slower processors and less RAM that are doing just fine.

Obviously, the phone will be running Android 2.3 out of the box, as well as Samsung’s own Touch Wiz interface customizations – the OS is good enough for anything you may need to run, and there will most likely never be an upgrade to Android 4.0 Ice Cream Sandwich, as Google themselves said the Nexus One (which has pretty much the same specs as the Stratosphere) is not good enough for the new OS (I suspect that the modding community will find a way to run it just fine, though).

Overall, the Samsung Stratosphere is nothing groundbreaking and not even a high end smartphone, but thanks to the average specs, the price will also be average, and the QWERTY keyboard and Super AMOLED display may be worth the money for a lot of people.