Sony Ericsson is one of the few (if not the only!) smartphone manufacturers that don’t seem to really care about the latest technologies when it comes to performance and features (it also applies to their other electronics, at least partially). Instead, they choose to focus on exterior appeal, including body design and the quality of the displays.

This has allowed them to carve out quite a large and cozy niche with little competitors, catering smartphones to those who want something stylish in their pockets and on their desks, not just some black or gray slab with a ton of hardware power that will most likely never be used. The Xperia Arc is the epitome of that, and despite its high price and Sony Ericsson’s bad track with software updates (some of their older phones still run Android 1.6!), a lot of customers love their purchase.

But it’s been half a year already since the Arc was announced, and now it’s time for something new. Keeping up with tradition, Sony Ericsson presented us with the Arc S, which has only minor improvements over the previous version, removing all the bad stuff and adding more goodies, kind of like the iPhone 3GS was to the iPhone 3G. 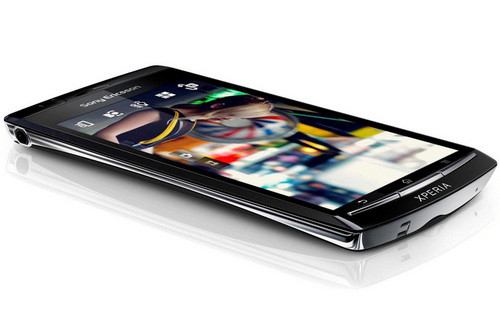 Practically nothing has changed on the outside of the phone: it’s got the same exact lines as the first Arc, with a curved back that looks very nice and a big 4.2 inch touch screen on the front, which still doesn’t cause the phone to feel over-sized thanks to the thin margins on the sides and the 8.7 mm ultra slim profile. The 854×480 pixels resolution display is marvelous – thanks to Sony’s Bravia Engine (whatever they mean by that), the colors pop and the contrast and brightness are great – this is a perfect device for watching movies and playing games (it’s the same Bravia technology used in the PlayStation Phone).

Right below the screen you’ll find the usual three buttons for Android navigation, and on the back of the device there’s only the 8.1 megapixels camera with an LED flash, which is also special: it uses Sony’s own Exmor R sensor that has a significantly improved performance and quality in low light conditions. Of course, it supports HD video recording, although it’s not 1080p, but 720p – still, that’s more than enough and thanks to the excellent sensor, the quality is better than many 1080p capable smartphones out there (the G2X, for example).

The biggest change is under the hood: Sony Ericsson has equipped the new Arc S with a single core 1.4 GHz Snapdragon, which should be quite a bit faster than the older generation 1 GHz processor running in the first Arc, not to mention that the graphics adapter has also been improved and the whole package uses less power, especially at idle. The amount of RAM remains the same at 512 MB – it’s enough for anything you can throw at the phone, since Android manages it pretty well.

Speaking of which, the phone runs the latest version of Android Gingerbread – no news there, however Sony’s own skin and interface customizations, while looking great, slow the navigation down a bit (enough to be noticeable), however they may fix that in a software update. I’d still prefer a vanilla Android install, since Gingerbread looks awesome on its own.

All the other hardware features are also there, from GPS, Wifi, Bluetooth and DLNA to support for HSPA+ networks (14.4 Mbps download) and a HDMI out port, which works similarly to the Atrix, G2X and other similar phones, i.e. the output can be fully mirrored on the big screen, and the resolution is enough for a pleasant navigation and gaming experience. Of course, if you want to watch a movie, you can output it in full 1080p resolution for the best quality.

The new Arc S is obviously not intended to be a replacement for the older Arc (you can get it of course, if you have the money), but a better purchase for those who buy their first Xperia – if you want more style than most of the Android smartphones can offer, while not sacrificing much in terms of features, this is the phone for you.