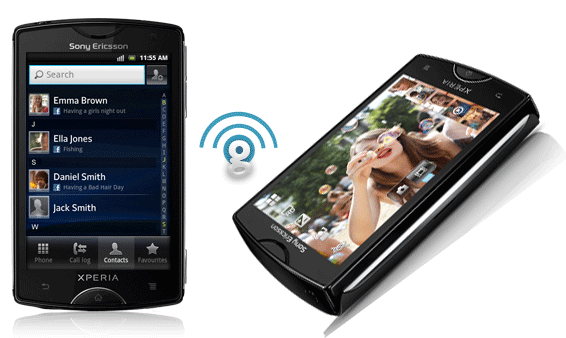 Sony Ericsson definitely stumbled upon a lucrative market with their compact Xperia Mini series. The keyboardless Xperia X10 Mini was just a prototype, apparently, but it was pretty successful with users, who like its small form factor and nice design. But the phone had a lot of room for improvement, and sure enough, Sony Ericsson released its successor just a while back – meet the new Xperia Mini.

If you’re confused by the naming, don’t be – it’s as simple as the older model having the X10 in the name and the newer being just the “Xperia Mini”, but you should be careful when reading online reviews and spec sheets, as some of them mix the two different phones up.

So, how did Sony manage to make the cute handset better? The noticeable differences start on the outside: while the older X10 Mini had a more rectangular design and straight lines, the new phone has the Sony Ericsson trademark rounded top and bottoms, while the three Android navigation buttons are now touch sensitive instead of old fashioned hardware types.

The camera on the back has moved up slightly and now features the HD moniker to show you that the phone can shoot high quality video (thanks to the upgraded processor, since the megapixel count is the same). Obviously, one of the biggest changes is the new 3 inch display, which has replaced the puny 2.55 inch unit, while upping the resolution to a bearable 320×480 (QVGA is really not enough these days).

The internal hardware has received a nice makeover, as well: the new Xperia Mini now runs on a speedy 1 GHz single core Snapdragon and has 512 MB of RAM – it’s not the Speedy Gonzalez of smartphones, but it certainly gets the job done faster than the X10 Mini, which had the low end 600 MHz MSM7227, also from Qualcomm.

There is no internal storage space, but you can use a micro SD card for that – standard fare on most of the older and now budget smartphones, and I think it’s actually better than having say, 8 GB inside, and no expansion slot. Of course, all the really important stuff like Wifi, Bluetooth, 3.5 mm jack, GPS and accelerometer are still there, with DLNA compatibility as a bonus addition.

Software wise, it’s safe to say that you’ll have a better smartphone experience on the Xperia Mini than on the X10 Mini – Android 2.3 Gingerbread can’t really be compared to the 2.1 update that was the last one the X10 got – it’s so much better and faster. Sony’s customizations have also been applied, and I think the four corner buttons and different apps drawer and notifications design is nice, although the default Gingerbread interface is pretty cool as it is.

The Xperia Mini is already available on the market, and according to Sony Ericsson, it’s still the smallest Android smartphone that can record HD video. If you need a compact phone that is easy to use, looks great and sits well in your pocket, this is it, although the price isn’t as low as people would want.