Trending
You are at:Home»Gadget Reviews»Sony Reader Wifi vs Amazon Kindle – can Sony still compete on the e-readers market?
By Gadgetman on Oct 24, 2011 · Gadget Reviews 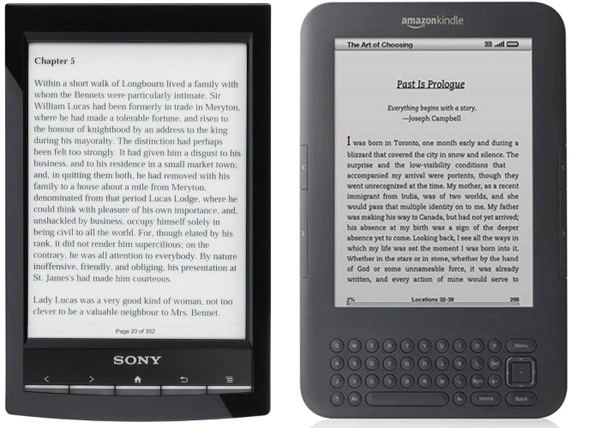 The e-readers market is quite crowded right now, but of course Amazon still holds the number one place by the number of users with their Kindle, which has now expanded into a series of devices for different types of use and different budgets.

Sony also has a few e-readers on the market, with e-ink displays and all, but they have always managed to elude everyone’s attention, even though the company was among the first to release a device equipped with an e-ink display. Still, they continue to be a competitor on the market, and that’s a good thing, only things don’t look so good for their latest e-reader, the Sony Reader Wifi PRS-T1, since its main competitor, the Kindle (the 2011 model) has everything that Sony’s device has to offer at almost half the price.

To be fair, Sony didn’t know that Amazon was planning such a move, as the new Kindle was released after the Sony Reader Wifi, but it’s interesting to compare the devices and see if Sony has any chance of surviving here. Obviously, they may lower the price, but then they would be selling at a loss or breaking even at best, while Amazon still makes a profit(albeit a small one) off their cheapest Kindle. More importantly, would people even choose the Sony over the Kindle?

Let’s see, the Sony Reader Wifi comes in a 173x110x8.9 mm compact and slim package, weighing 168 grams and with a 6 inch, 600×800 pixels resolution Pearl E-Ink display that has an infrared touch screen over it and a nice contrast ratio – this is the best technology currently on the market, after all. Along with that, it’s got 2 GB of internal memory and a micro SD card slot for another 32 GB if you wish (I personally don’t see myself using even 1 GB of that, even though I do like to read).

Amazon’s Kindle counters that with a similarly sized housing, only 8.6 mm thick and weighing 169 grams (yeah, big difference :-)). The display is also a 6 inch, 600×800 pixels Pearl E-Ink, which I really suspect comes from the same manufacturer and maybe even factory as Sony’s unit, but it lacks the digitizer, which may not seem like a problem, but just think about typing on this thing – how are you going to do it? That’s right. The solution is to cycle through letters like on a universal remote, but that is very hard to do, especially when making a search on Google. The browser, by the way, is much better on the Kindle than on Sony’s product, and you get the benefit of using Amazon’s cloud enhancements, as well.

The main attraction point for the new Kindle is the option to buy it for only $109 or even $79, the latter price being for the ad-supported version. The ads are pretty unobtrusive, with a few banners on the home screen a la Android and full screen banners in the form of screen savers – it might be worth getting if you don’t mind them. Sony’s Reader Wifi PRS-T1 will retail for $149, but as I said, the price may go down if they don’t have enough sales, and I’m sure they won’t.

Technically, Sony’s e-reader still has a few advantages over the Kindle, but the big Amazon market and integrated services can make up for that, plus the price for the new Kindle is unbeatable, while the quality is the same – Sony and other e-reader manufacturers will have a tough time ahead, for sure.