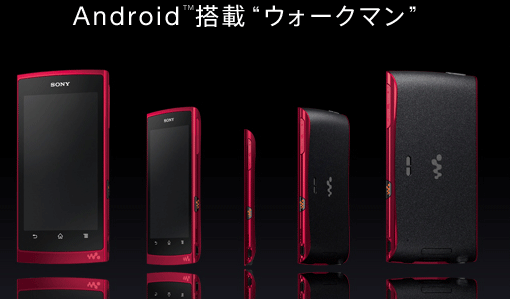 The Walkman brand has a long history behind it – you probably remember all the cassette and disc players from the series, which was state of the art at the time (I remember that only Panasonic could match Sony in quality), and it has transitioned quite well into the new digital era, as well, with the new LCD-equipped portable media players enjoying enough popularity to make it worth producing over a dozen models of them over the years.

Sony has finally decided to take the next logical step and release an iPod Touch-like media player that would be perfect for entertainment on the go but would lack the requisites necessary to call it a communication device, a fact which would set it apart from all the smartphones around. I’m not so sure that would work, but if it’s priced right, it can sell pretty well. All of this is about the new Walkman Mobile Entertainment Player, of course.

Unique design that features elements of both Xperia and Vaio products

The Walkman MEP looks very nice, and while its design has a lot in common with all the other Sony devices out there, it lacks the curvatures, instead opting for a more angular design, with straight lines and a flat profile – kind of like the high end Vaio ultra-portables, actually. That makes it unique and stand out from the crowd, although it kind of looks like Sony copied the front design from the Zune HD – that’s a subjective opinion, of course, as it is definitely different enough from Microsoft’s product and obviously very differently styled than its main competitor, the iPod Touch.

The new Walkman is equipped with a very nice 4.3 inch touch screen, which uses Sony’s proprietary Bravia Engine to make the colors better, and that really makes a difference. Of course, the device has a 3.5 audio out jack, a HDMI out port, a Wifi and Bluetooth adapters – everything you need to copy digital content to and from the device without problems.

Surprisingly (or maybe unsurprisingly), Sony’s new Walkman Mobile Entertainment Player uses a full, uncut and unedited (at least in the demo version) copy of Android as its OS, and that opens up a whole new world of possibilities. From the looks of it, Sony also customized the thing with its own interface and apps, which makes sense, since the Walkman always ran something proprietary before, and giving that up is not that easy, especially for something with such a long history behind it.

Unfortunately, there was no word on the availability and pricing of the Walkman Mobile Entertainment Player, but it’s definitely a certainty that it’s coming, and I’m guessing the price will be similar to the iPod Touch, in which case Apple’s uncontested media player will finally have some good competition. I suppose all we have to do is wait and see…