Trending
You are at:Home»Gadget Reviews»Asus Transformer Prime vs the iPad 2 – looks like the iPad 3 will have some catching up to do
By Gadgetman on Nov 24, 2011 · Gadget Reviews 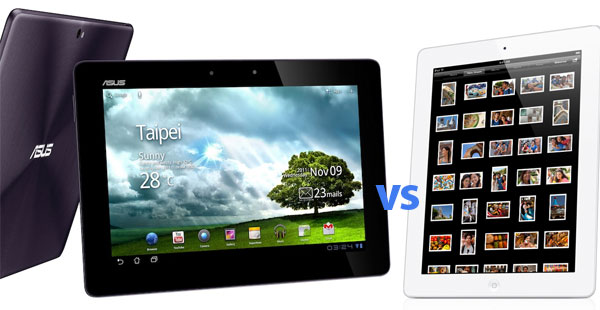 The iPad may have been the revolutionary device that started the whole tablet craze (and it still is the bestselling device in the niche), but what kept it going were the dozens of different Android tablets that followed soon after and expanded the market to include professionals, businesses and people who can’t afford the iPad. Many were hoping that the iPad 2 would change that and will give Apple complete dominance over the market, but that did not happen, even though the iPad 2 is selling even better than its predecessor.

The specs of the iPad 2 are pretty decent, however it seems that the tablet is severely lacking when it comes to hardware specs, especially compared to the latest generation of Android slates – it looks like the iPad 3 will have quite a lot of catching up to do. As an interesting example, we’ll compare the iPad 2 with the Asus Transformer Prime – the latest tablet to come out from the Android camp.

Both the Transformer Prime and the iPad 2 look similar on the outside, being made out of metal, with Gorilla glass on the front and a super slim profile at only 0.34 inches, which is even thinner than the iPhone 4S and many smartphones out there, too. The displays are comparable in quality, too, although the 9.7 inch 1024×768 pixels IPS unit on the iPad 2 is a bit smaller both in size and resolution than the 10.1 inch 1280×800 IPS+ screen used in the Transformer Prime. There’s not much else to be said about them in these regards, so let’s move on.

The internal part is the most interesting and it really shows how far Android tablets have gone while the iPads were drinking chamomile tea on a porch :-). Even the previous generation could easily beat the iPad 2 in performance in benchmarks and real life applications, but the Asus Transformer Prime takes the cake – its 1.4 GHz quad core Tegra 3 SoC with the new 12-core GeForce graphics adapter is simply incredibly fast. It’s literally twice as fast as the iPad 2’s dual core A5 and PowerVR graphics adapter, while consuming the same amount of power. The tablet also has 1024 MB of RAM, compared to the iPad 2’s 512 MB, which makes it better for multi-tasking – especially useful since the Android 4.0 Ice Cream Sandwich update will bring a lot if improvements in that department.

A lot of the other hardware specs are pretty much the same, so I’ll just list the ones that are missing in the iPad 2 and are present in the Transformer Prime. To start with, the Asus tablet will have a full sized SD card slot that will take SDXC cards, i.e. you’ll be able to easily use 64 and 128 GB cards to expand your storage space. The camera on the back of the Transformer is a 5 megapixels unit that will take better photos than the 0.7 Megapixels one on the iPad 2, as well as shoot HD video. There are also a pair of stereo speakers and a front facing 2 megapixels camera – both better than their iPad 2 counterparts. Of course, the Transformer Prime does not come with a 3G radio, so we’re only comparing the Wifi only models of the iPad 2.

There’s really no comparing the Android and iOS operating systems, however I have to say that Android 3.0 Honeycomb looks and works much better than the simplistic iOS – you’ve got more capabilities of the OS, more widgets on the screen, better multitasking with live previews in widgets, and more. Android 4.0 Ice Cream Sandwich, which will be installed via OTA on most current smartphones and tablets, will be even better, with over 200 improvements, both in the code and on the user side – iOS really stands no chance in that regard.

Of course, there are more apps for the iPad 2, which makes its purchase worthwhile, but compared to the new generation of Android tablets, it really is behind times. The Asus Transformer Prime, which will be in stores this December, is faster and better, at the same price, making for a much better choice long term.