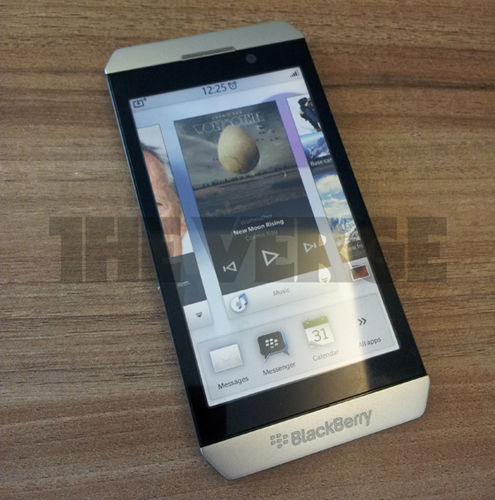 RIM has been going through some pretty tough times lately, with both their market share and stock going down like it’s sliding on butter, and even though they said they’re going to throw everything they’ve got at modernizing and releasing some new smartphones, tablets and other devices that will bring back their former glory, it didn’t look like there’s actually a lot of action going on.

But RIM has indeed been improving their products, with the newer Blackberries being just as powerful as their Android counterparts, but sadly they’re still mostly bogged down by the Blackberry OS. Their Playbook tablet, on the other hand, is not – it runs the all new QNX OS, which is pretty impressive in architecture, code and features.

And right after RIM said there won’t be a Playbook 2 (a shame, since the first model is indeed a great tablet, even though the number of sales doesn’t say that), a picture of their next smartphone leaked out – and whether it was intentional or not, you can’t say you’re not impressed by the new design. Plus, the device, which was dubbed the Blackberry London, will run on QNX, being the first Blackberry to do so.

Judging by the single leaked picture and the ton of rumors around the Internet, the London will be one tough cookie, indeed. The design is reminiscent of the Porsche Design P9981 handset we’ve seen a while ago, but it’s an all touch smartphone, and if this is where Blackberry is going with their design for consumer smartphones, I like it very much.

The purported hardware specs are also pretty impressive – besides the 3.7 inch touch screen with a qHD resolution (not that far-fetched, seeing as a lot of Blackberries use a higher DPI than most Android phones), the phone is supposed to have a dual core TI OMAP processor running at 1.2 or 1.5 GHz, with the same PowerVR SGX540 graphics adapter that is in the Droid RAZR, as well as a full gigabyte of RAM and 16 GB of onboard storage – that should definitely be enough for most business people, but for consumers who might want to store a few videos, music and games on their handset, as well, a micro SD card would me in order.

The camera is supposed to be an 8 megapixels unit with support for Full HD video recording (Blackberry already has a few 5 megapixels units that can shoot 720p) and there’s obviously a front facing camera, too, most probably 1.3 or 2.0 megapixels in sensor size.

If that is the case, the future of Blackberry may not be as bleak as a lot of people (including myself) think. However, they do need to move quicker, since the competition is still pretty much ahead of them, plus the quad core smartphones will be here soon. Sadly, if the rumors are true, the phone will not be available until the third quarter of 2012, by which time it will once again be playing catch up to the big boys.

But let’s hope that the latter is not true, and RIM will surprise its fans with an all new OS and smartphone by the beginning of next year – that would be great news for all the corporations that depend on Blackberry services, as well!