Trending
You are at:Home»Gadget Reviews»Choosing a portable media player – iPod Touch, Galaxy Player or neither?
By Gadgetman on Nov 19, 2011 · Gadget Reviews 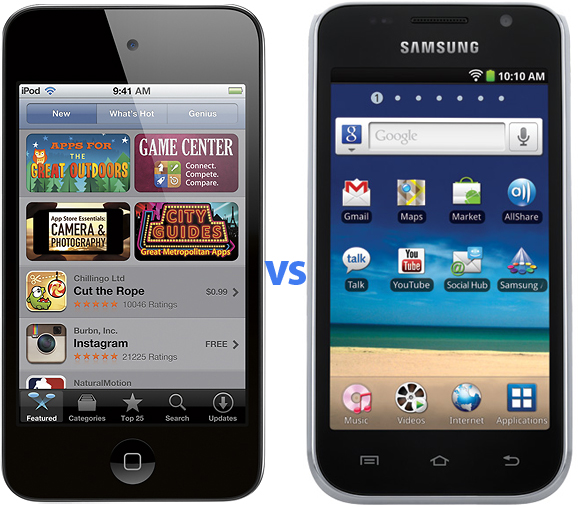 The portable media players market is currently dominated by the iPod family, but it’s not some Mafia-style reason like them holding up everyone, it’s a simple matter of lack of being the best in the field – there are quite a few competitors around, yet none of them have managed to release a product that is anywhere near as good as the iPod Touch, Nano, Classic or Shuffle. I don’t think it should come as a surprise, either – Apple really knows how to create great products.

But other manufacturers aren’t sitting still. Even though the smartphone and tablet markets were practically reinvented by Apple, Samsung has managed to take over a large chunk of it using their own great products, with the latest Galaxy Tab and Galaxy S smartphones being among the best in the world, and thanks to the Android OS, they’re not lacking in the software part, either.

And how, the electronics giant is ready to take on the Apple-dominated media player market, as well. Their new portable media players, the Galaxy Player 4.0 and 5.0 are definitely the most capable competitors for the iPod Touch to date, and the main reason for that is that they’re using the same concept as Apple – take a great smartphone, strip out the phone part, and sell the resulting product as a media player.

The main difference between the Galaxy Player 4.0 and 5.0 is the screen size, of course – the 5.0 has a 5 inch display that looks good, but makes the device pretty much non-pocketable. The Galaxy Player is basically a phoneless Galaxy S smartphone – everything else is pretty much intact, including the full Android OS, the processor, camera, Bluetooth, even the GPS receiver.

The choice between the iPod Touch and a Galaxy Player is not as easy as it may seem – unless you really like the simple interface of iOS, you should at least look twice at the spec sheet of the GP and the flexibility and customization options of Android before making the final decision.

With the latest $199 8GB iPod Touch, you get a 3.5 inch 960×640 pixels display that is one of the best in class, Wifi, Bluetooth, GPS, and a 0.7 megapixels camera on the back that is decidedly not for taking good photos (but which supports HD video) plus a VGA camera on the front, as well as an integrated microphone, which makes it capable of VoIP calls… if you jailbreak the device.

The Galaxy Player 4.0 can counter that with a 4 inch, 800×480 pixels Super LCD that looks great (but slightly worse than the iPods – not noticeable in everyday use, though), Wifi, Bluetooth, GPS, a 3.2 megapixels camera that takes some pretty good shots and also supports HD video recording, a front facing VGA camera, 8 GB of storage space + a micro SD card slot for up to 32 GB more and of course, Android Gingerbread, which can be customized and which lets you make VoIP calls without rooting (although you can do that, too).

Overall, Samsung has released quite a good competitor to the iPod Touch, which deserves your attention, but frankly, I don’t see the point in getting either of them – instead, I’d settle for a Galaxy S smartphone, which has better specs than the Galaxy Player (including the beautiful Super AMOLED display) and is currently very cheap at $99 with a contract or even free (limited time action at Best Buy). But that’s just my opinion – if you have to choose between the iPod Touch and the Galaxy Player, I wish you good luck!