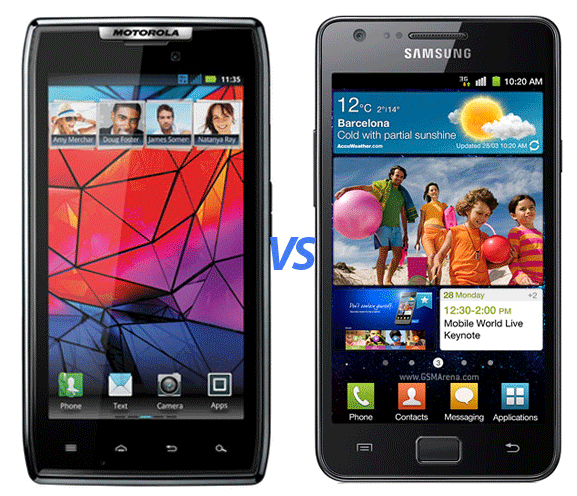 The Samsung Galaxy S2 was released just a few months ago and has instantly become the flagship Android smartphone, even though its main competitor, the HTC Sensation had almost the same specs and a better build quality. But time doesn’t stay in one place, and we already have several potential competitors ready to take the flag from the S2. One is the Galaxy Nexus, of course – a phone that everyone was expecting, but the other one, which is actually even better, is the Motorola Droid RAZR.

The Droid RAZR came to be pretty unexpectedly, and it is interesting to see what it can do compared to the previous generation flagship, The Galaxy S2, which is no slouch and can easily compete with anything that will be released in the next several months. So, can the new RAZR outdo the current leader?

First of all, I have to say that both handsets run the same Android version, 2.3.5 Gingerbread, and the only difference between them software wise is the custom skin – Samsung uses their Touch Wiz 4.0, while Motorola sticks with MotoBlur. Both of them are pretty annoying, and I think the default Android look is better, but fortunately, you can always remove the customizations and make your home screen look however you want – that’s the beauty of Android. The performance should be pretty similar in both devices, and they’re also going to get the 4.0 Ice Cream Sandwich update in the future, so they’re pretty much even on the software front.

The Droid RAZR holds up to its name, being the thinnest smartphone on the market at only 7.1mm, and even the hump that houses the camera, speaker, 3.5mm audio jack, USB and HDMI ports is just over 9mm thick, very close to the Galaxy S2’s overall 8.5mm thickness. Unlike the plastic construction and feel of the Galaxy S2, the Droid RAZR is dead sturdy, having a completely metal body, with a large Gorilla glass covering the whole front and a Kevlar back cover – there are no flexes or creaks, and the device feels just as good as the first Droid or Droid X – if you ever held one of them in your hands, you know what I’m talking about. While the Samsung Galaxy S2 has a very nice design, I think that Motorola just beat them at their own game with the new RAZR.

The Droid RAZR continues to impress on the inside, as well, although the difference between it and the Galaxy S2 is minimal. The Galaxy S2 has an Exynos chipset, with the two processor cores running at 1.2 GHz, while the Droid RAZR uses a TI OMAP 4 platform, running at the same 1.2 GHz, so the performance in apps should be pretty much the same. Both phones have a full gigabyte of RAM to help speed things up in multitasking, and the Mali 400 and PowerVR SGX540 are pretty much the same when it comes to graphics and 3D performance.

The display on the Galaxy S2 is a wonderful 4.3 inch Super AMOLED Plus, and even at the standard 800×480 pixels resolution, nothing comes close to it in terms of picture quality, but the Droid RAZR’s own 4.3 inch SUPER AMOLED qHD display comes pretty darn close – in fact, you can’t really tell the difference in everyday use, and I’d much rather go with a higher resolution in this case, as you can fit more on the screen.

Aside from the GPS, Wifi, DLNA, Bluetooth, 8 and 1.3 megapixels cameras, and the bunch of sensors that are the same on both devices, the Droid RAZR has a bigger battery (1780 mAh compared to 1650 mAh) and support for 4G LTE networks, which is great for the long term, as you’ll be able to use the new speeds without having to get a new phone in a few years. The separate USB and HDMI ports are also a plus, since it’s easier to use the phone in a dock and without buying an expensive cable.

The Droid RAZR certainly matches and even outmatches the Galaxy S2, which is impressive considering it’s a Motorola device, and it can definitely replace it as the flagship phone, especially if Motorola does the marketing right. I think the RAZR is even better than the new Galaxy Nexus, and with Android 4.0 Ice Cream Sandwich, it will be one of the best high end smartphones for a long time.