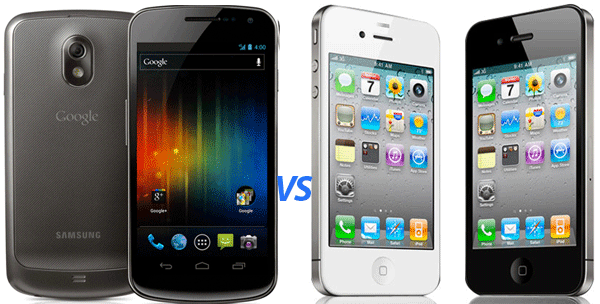 Apple has finally released the much awaited next model of the iPhone, and it disappointed a lot of people with it – the new iPhone 4S is just a small improvement over the previous iPhone 4. Despite that, the sales seem to be going strong, and the 4S has pre-sold more units than the previous model – pretty surprising, but I guess Apple knows how to market and get the most out of an existing design.

Meanwhile, high end Android smartphones (that cost the same as the iPhone 4 and now, the 4S) have long since been in the lead in the hardware features, performance and arguably in the user interface departments – most of the new phones come with all the features you can think of, big and beautiful screens and the sleek and fast Android 2.3 Gingerbread that looks pretty damn impressive, especially compared to the simplistic look and feel of iOS (which is slightly easier to use, though).

If you’re current contract expires soon or you’re looking for a new smartphone to buy and use for the next couple of years, you could certainly get the iPhone 4S, which looks exactly like its predecessor and will most likely feel the same, bringing nothing new to the table for most people. Or you could wait a bit till mod-November and get the Samsung Galaxy Nexus – the new flagship of Android phones, with an excellent design that is different than Apple’s (which should get pretty boring after a year or two of ownership), enough processing power to take on any smartphone or tablet and a ton of new features thanks to the all-new Android 4.0 Ice Cream Sandwich – the most advanced mobile OS yet.

Seeing as they’re the most advanced phones from Apple and Google/Android to hit the market this month, it’s interesting to see how they stack up against each other, and the decision to buy one or the other rests as much on the hardware as on the software part, so it may be difficult to choose.

The iPhone 4S is definitely no slouch, but it’s nothing special in the hardware department – it’s got a custom dual core processor running at 1 GHz, 512 MB of RAM, an 8 megapixels camera on the back and all the usual adapters/sensors that a smartphone should have. The display is the same 3.5 inch unit, which looks great, but the size may be a problem for some people – for example, I never got used to it, it’s just too small (Motorola Droid’s 3.7 inch wide screen is the minimum I’m comfortable with).

The operating system provides the only incentives for the upgrade – iOS 5 has a lot of improvements and new features, among which the biggest ones are Siri and support for iCloud – these two will not be coming to the iPhone 4 with the iOS 5 update, and moreover, the third party Siri was disabled for existing users (real nice move from Apple). Aside from that, it’s the same old interface with the same old layout and simplistic ideology – after all, if it works, why fix it?

The Galaxy Nexus looks fresh and pretty cool – the first thing you’ll notice is that there are no touch buttons on the front – they’ve been virtualized now, leaving more space for the screen and are even dynamic depending on what app you’re using. The big 4.65 inch Super AMOLED display looks simply awesome and has an amazing resolution of 1280×720 (yep, HD in your palm at last) – if you’ve seen the Galaxy S or S2’s displays, you’ll know that it’s really good.

The phone has a dual core 1.2 GHz TI OMAP 4460 processor, one of the fastest on the market, and with 1024 MB of RAM, you’ll never be able to overload this little monster, even if you fully use the new multitasking features. The camera is a 5 megapixels unit, which may sound weird but the quality is very high – comparable to the iPhone 4S, for sure. You also get support for 21.1 Mbps HSPA+, as opposed to 14.4 on the iPhone 4S.

Android 4.0 is the biggest release yet, and it has a lot of new stuff to offer for users. It’s easier to use, though the learning curve is still not as easy as on the iPhone, it has Face Unlock, Android Beam, a redesigned interface, browser, Google apps, integration with Google Plus, and much more. It’s a great update for 2.3 Gingerbread, and that says a lot.

Even though, let’s say, you won’t use all the hardware power that either phone offers, Android 4.0 is definitely worth considering – its customization abilities and the sleek interface is really great – moving from the simple iOS to it must feel like graduating and going to college :-). The Galaxy Nexus looks and works better than the iPhone 4S, but if you’re buying your first phone, either of these devices is fine. However, if you’re really into Apple and can’t get an Android phone, you should at least wait for the iPhone 5 – the iPhone 4S is not really worth the money.