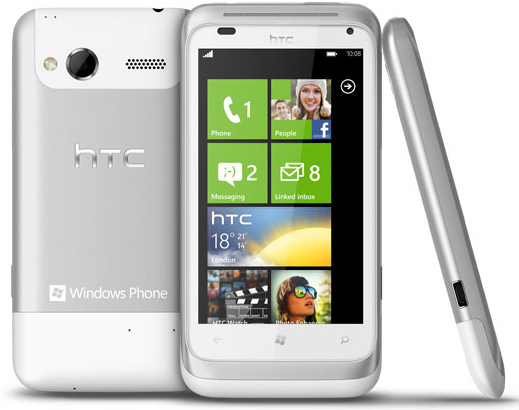 The second generation of Windows 7 smartphones is already here, and while most of the phones are not all that impressive (mostly because of the last generation single core processors they’re running on, because Windows 7 Phone does not support multiple cores), at least they’re fast enough for any aps that are on the Market, as well as relatively affordable (the prices are probably lower because Microsoft wants to gain as many users and developers as possible before rising them).

One of the latest smartphones running Windows Phone 7 with the Mango update, or as a lot of people call it, Windows Phone 7.5, is the HTC Radar 4G. It’s actually the first phone to ship with Mango pre-installed in the US, and it’s a pretty good smartphone for most people, plus it’s affordable.

The Radar 4G follows the same design as most other recent HTC phones – you’ll recognize that by the speaker grill, touch buttons, metallic frame and the camera on the back pretty much instantly. The body is built a lot like the oldie HTC Legend – with a unibody aluminum frame and plastic inserts for the radios, antennas, SIM card and battery. This makes the phone feel very sturdy, except for the bottom plastic cover, which looks kind of flimsy (but holds up well).

The internal hardware is not very impressive – the Radar 4G actually runs on the previous generation single core 1 GHz Snapdragon, with Qualcomm’s own Adreno 205 GPU. Admittedly the processor should be fast enough for most of the tasks and apps you might throw at it, but it won’t win any benchmarks or do video editing, that’s for sure. The 512 MB of RAM is the minimum recommended by Microsoft and should be enough for the limited multitasking that Windows 7 (even Mango) has.

The display is a pretty decent 3.8 inch Super LCD with the usual 800×480 pixels resolution, which will display your favorite Web pages, apps and videos in great colors, contrast and brightness, although obviously it doesn’t compare to the Super AMOLED on the recent Samsung Focus S or the iPhone 4S’ Retina display. The storage space is provided by 8 GB of internal memory, with no micro SD card slot in sight – well, you get what you pay for, but 8 GB is really low for a modern phone.

The 5 megapixels camera on the back is able to take decent photos and shoot 720p HD videos – pretty much what you’d expect from any handset nowadays. There’s also a front facing VGA camera, which is intended for video calls – interestingly, only Windows Phone 7.5 supports it. Obviously, the smartphone has Wifi, Bluetooth and GPS radios, as well as support for HSPA+ networks with speeds up to 14.4 Mbps download (hence the 4G in the name) and 5.76 Mbps upload.

The HTC Radar 4G is already available on T-Mobile’s network in the US, but unless you really like the Windows 7 Metro UI or the design of the phone (I admit, the white version is pretty nice), I don’t see why you’d choose it over the Samsung Focus Flash or better yet, other Android phones – it’s a pretty mediocre smartphone, after all.