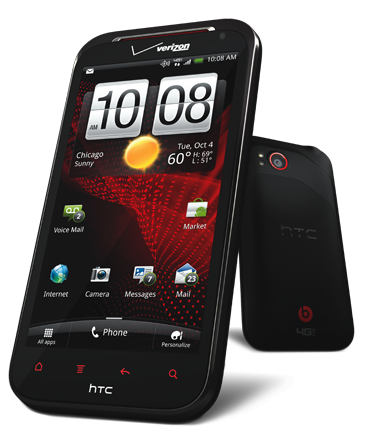 The past month has seen quite a few newcomers to the smartphone market, among which the Galaxy Nexus and the Motorola Droid RAZR that have impressed nearly everyone with the new specs. Things are moving quite fast, seeing as these two phones made the Galaxy S2 and HTC Sensation seem like yesterday’s news, and of course, HTC needed to make their own next super-phone, which they promptly did with the new HTC Rezound.

The Rezound follows the same design cues as the HTC Sensation, with a bit of Droid Incredible/HTC Vivid thrown in in the form of the back cover that follows the internal profile of the chassis. The phone also features a red “interior”, courtesy of it being branded with “Beats by Dr. Dre” – it was about time they released something with HTC in the US. The touch navigation buttons below the display also have a red color, giving the phone a more unique look.

The main changes from the previous flagship (the Sensation, of course) are on the inside – this phone has had a lot of upgrades, and although most of them are pretty small, they are noticeable. The 4.3 inch display is a Super LCD and has a 1280x720p resolution, which is the same as the Galaxy Nexus, although obviously the S-LCD technology is a bit worse when it comes to colors and sunlight visibility compared to the Super AMOLED used by Samsung. The resolution is also higher than the 960×540 qHD on the Droid RAZR, and although I don’t think people will notice any difference in day to day use, the pictures are sharper and you can fit even more text on the screen with a higher resolution.

The processing power is provided by a third generation, dual core MSM8660 Snapdragon, running at 1.5 GHz and featuring Qualcomm’s new Adreno 220 graphics adapter – one of the fastest solutions on the market at the moment. Coupled with 1024 MB of RAM, it makes for a very snappy experience, and it can certainly run any app you may need or run a dozen of them at the same time (especially since Ice Cream Sandwich will have improved real-time multitasking support).

There are 16 GB of onboard NAND Flash storage space, and thankfully a micro SD card slot is also present, allowing you to install an additional 32 GB (or lower) if you so wish. That leaves you with enough space for anything you’ll ever need to store on a smartphone, and with the prices for Flash memory going down, it’ll be a pretty cheap upgrade. Imaging capabilities wise, the Rezound has an 8 megapixels camera on the back with dual LED flash that lets you take some pretty impressive photos and 1080p HD videos, as well as a smaller 2 megapixels camera on the front for video calls and the occasional self-shots.

Among the other notable hardware features are the Wifi N and Bluetooth adapters, GPS transceiver, HDMI out capability via the USB port, DLNA compatibility and of course the 4G LTE radio that should provide you with speeds north of 42 Mbps and 10 Mbps, download and upload.

The only thing that is notably missing is in the software – there is no Ice Cream Sandwich on the phone! I don’t understand the reasoning behind this – I thought that the Galaxy Nexus had priority, but Google said they will not withhold Android to give themselves a competitive advantage and seeing as Motorola is now owned by them (and the Droid RAZR still runs on Gingerbread) and more importantly, the ICS source code is already out, it’s a bit weird that we have to wait a few months to get the update. Thankfully, there is no doubt that HTC will update the Rezound over the air, so it’s OK in the end.

The Rezound’s price hasn’t yet been announced, but judging by its specs, it should be higher than $199, for sure. If you want to get the highest specced phone possible in the following couple of months, this handset is worthy of consideration.